The NFL Double Standard is Alive and Well 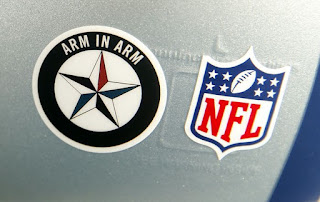 The National Football League has descended as low into the hypocrisy barrel as it can go if you ask me.

While the internet explodes this morning over Colin Kaepernick's decision to not stand during the National Anthem, I'm more disgusted with the double standard of the NFL, not only in their support for his decision to disrespect the flag, but also with their decision to disallow the Dallas Cowboys to wear stickers showing support for the officers that were murdered in their city in an ambush.

The NFL released this statement with regard to Kaepernick's protest:

The NFL also released a statement, obtained by NFL Media Insider Ian Rapoport: "Players are encouraged but not required to stand during the playing of the national anthem."


With regard to the Arm in Arm decal the Cowboys wanted to wear on their helmets, the NFL said that every team "must be uniform," and so the decal was disallowed.

One Dallas Morning News sports columnist agreed, saying that there are "other ways to honor them without opening this political door," however I believe that Colin Kaepernick has opened a much bigger political door.

I'd rather focus on the NFL in this debate than Kaepernick because the NFL has long proven itself to be a disreputable and biased organization.  They allow criminal behavior from their players, they stage raunchy, anti-police half-time shows at the Super Bowl, and they have consistently shown bias against behavior that goes toward Christian morality and positive role models, only reversing themselves on that last issue when called out about it.

When asked about his boycott of the flag, Kaepernick said:

"I am not going to stand up to show pride in a flag for a country that oppresses black people and people of color," Kaepernick told NFL Media in an exclusive interview after the game. "To me, this is bigger than football and it would be selfish on my part to look the other way. There are bodies in the street and people getting paid leave and getting away with murder."


If this is "bigger than football," then don't use football to protest it.  Do something where you can make a difference.  Perhaps he should follow the advice of this Army Ranger.

How many inner city, troubled kids does he mentor?  I haven't seen that information yet.

Kaepernick is a spoiled, ungrateful brat who most definitely wants it to be all about him.  As bad as that is, shame on the NFL for allowing him to hijack their platform for this nonsense.

But of course, the NFL likely feels the same way.  Really, the bottom line here is that it is okay to boycott the American flag but not okay to support police officers.

Hypocrites.
Posted by Pat Austin Becker at 10:29 AM