Take a Trip to Tour Oakland Cemetery in Shreveport

Sometimes you have to play tourist in your own city. I've been extremely busy this past year or so with book revisions and teaching school, among other things, and so Steve and I haven't been able to take the usual round of day-trips that we so often do.

This makes Steve bored, and antsy.

Yesterday, Saturday dawned clear and lovely, low humidity, and the slightest hint of a promise of fall, so we decided to get out of the house. We headed downtown to take a tour of Oakland Cemetery which is something we've been talking about doing for ages but have never accomplished -- until now.

My curiosity about Oakland was piqued when Friday, just by chance, I saw the Shreveport Times article about the McKellar mansion on Oakland Street.

Mary Belle McKellar was a journalist and civic worker who wrote articles, often about history, that were published across the United States. I ran across Mary Belle in my research on Cammie Henry because Mary Belle was a friend of Cammie's and spent a great deal of time at Melrose working in one of Cammie's cabins. She lived in her father's home on Oakland Street in Shreveport and from there she wrote long, chatty letters to Cammie in which she updated Mrs. Henry on social events in Shreveport, the activities of common friends, what was growing in her garden, and local politics. Mary Belle was a member of the United Daughters of the Confederacy and it is because of her work that Fort Humbug in Shreveport was designated as a Confederate Memorial Park, or site.

Her father was Reuben McKellar and my favorite story about him can be found in the book Shreveport's Historic Oakland Cemetery: Spirits of Pioneers and Heroes by historians Gary Joiner and Cheryl White.  Reuben McKellar was a former mayor of Shreveport and a judge:

"...he was known to routinely sentence offenders with a fine of $7.50 or 1,000 bricks. McKellar thought the fine of $7.50 sufficient for most misdemeanor offenses, and those offenders unable to pay were sentences to lay one thousand bricks on downtown streets."

Judge McKellar died in 1933 and his daughter Mary Belle died in 1941; both are buried in the family plot in the shadows of their historic home on Oakland Street.

Armed with our restlessness, a new curiosity about the McKellar mansion restoration, and a desire to see Oakland Cemetery again, Steve and I set off to act like tourists in our own city.

Oakland is right across from the truly grand Municipal Auditorium on the west end of downtown. Amazingly, our city leaders wanted to tear this stunning structure down not too many years ago but fortunately, saner heads prevailed and it has undergone a thorough restoration.

This building deserves a blog post of its own but for now, suffice to say that it was built in the 1920s, has the most stunning brickwork I've ever seen with nearly every possible brick pattern known to man somewhere in its construction, and has Art Deco elements to die for.

This lamp makes my heart sing:

Of course everyone knows that the Louisiana Hayride started here and just about everyone you can name has played here from Patsy Cline, Elvis, Jackson Browne, George Carlin, Hank Williams, Johnny Cash...it's just endless.  Endless. 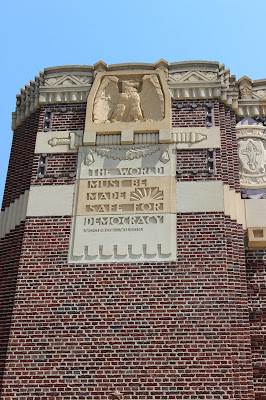 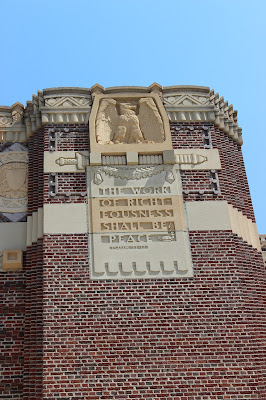 The detail work on this building is just unreal.  And of course there is Elvis... 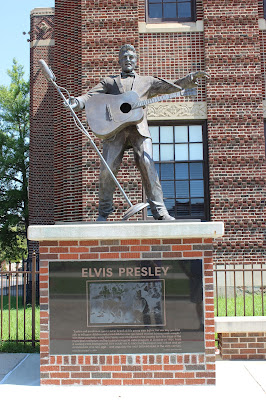 But, as I said, Municipal deserves its own post some day, so we will move on down the (simulated) trolley tracks to Oakland.

We paused to admire the Asian Gardens which you can find right behind Municipal Auditorium:

But our guide was waiting so we headed to the cemetery.

Oakland Cemetery sits on rolling hills between Sprague Street and Milam Street, behind the First United Methodist Church and next to Municipal Auditorium. The last time Steve and I went through there, years ago, it was in terrible disrepair.  Neglect and vandalism had taken its toll.

That is no longer the case.

We began our tour with Steve Smith of the Oakland Cemetery Preservation Society.  Mr. Smith gives these tours every Saturday at 1:00; just meet him in the parking lot.  But hurry -- he's been doing this for a long time and is scaling back at the end of the year.

Mr. Smith was leaning against a crumbling wall which was buckling under the pressure drift of soil long retained by walls and wrought iron.

The tour consisted of a long walk through the cemetery with Mr. Smith pointing out graves and markers about which he would tell a story and make the people resting there live again. 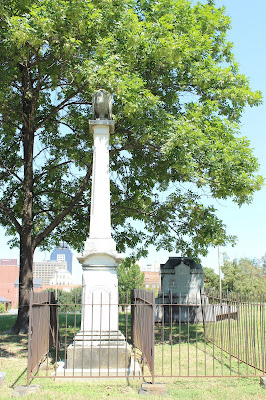 At one time this cemetery was filled with wrought iron and cast iron fencing around various plots; Mr. Smith estimates that only about 30% of that fencing remains. Between the scrap iron efforts during the war and the vandals, not much of it remains. Many of the iron gates have been stolen by people who put them in their gardens. They even resorted to stealing bricks before the Preservation Society was able to slow all this down by its efforts at maintenance, upkeep, and security.  Roads have been paved, gates installed, trees trimmed, brush cut out, and now sprinkler systems are coming in and landscaping.

The markers there are unique but the people buried there are legendary.

We heard about a former slave who, after obtaining her freedom, married and opened a store in downtown Shreveport; she made lots of money but died penniless.

The cemetery has black citizens, white ones, a Hebrew section, city founders and bigwigs, an operator of a bordello, and children of Presidents.  There are about three hundred graves of Civil War soldiers.

Oh, and I found Mary Belle and her dad:

The stunning monument of beloved Shreveport historian Eric Brock is on the back, west end, which is sobering. Mr. Brock died in 2011 at the young age of 45 and, fittingly and he now rests in Oakland Cemetery.  Brock was instrumental in the effort to preserve this landmark. Look closely at his monument if you go visit: the lace pattern from his wife's wedding dress is worked into the detail of the stone. It's lovely.

The tour ends upon the top of the highest hill in the cemetery, overlooking downtown Shreveport. It is the Yellow Fever mound where nearly 1,000 Shreveport citizens are mass buried in trenches. The 1873 Yellow Fever epidemic decimated Shreveport's population.

We spent about two hours on the tour and I can promise you, if we had started right over, Mr. Smith could have done it all over again and we would not have heard the same stories -- there is so much history there and so many colorful characters.  I came right home and ordered the Joiner and White book so I can learn about some of the other people there.

Even better: Mr. Smith does a History Ghost Walk on Saturday nights at 8:00, starting at the Confederate Monument in front of the Caddo Parish Courthouse. He invited us to come along last night, so of course we did.  Another two hours of walking and touring, this time with Mr. Smith in period dress and displaying a iPad with photos of historic Shreveport scenes to augment the tour. I have lived in Shreveport my entire life and learned things from him that I'd never known before.

Did you know Howard Hughes was arrested as a peeping Tom here?  He wasn't the creeper as it turns out, but hey, anything can happen in Shreveport.

Again, if we did the Ghost Walk tour again, I can assure you we would hear completely different stories.  Mr. Smith's vast knowledge of our city is fascinating.

I highly recommend both tours, especially now that fall is in the air, there is no better time!