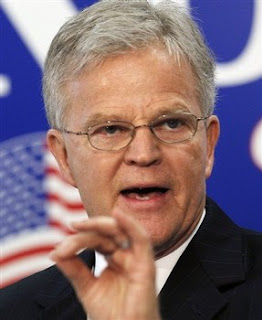 Shreveport native Buddy Roemer is set to announce his bid for the presidency this Saturday at a rally at the Bossier Convention Center.

Former Louisiana Gov. Charles E. "Buddy" Roemer III, who has his sights set on the presidency in 2012, will hold a public rally Saturday in Bossier City.  The gathering of supporters will be from 4 to 6 p.m. at the Bossier Civic Center, 620 Benton Road, in Bossier City.According to releases, Roemer intends to announce his presidential aspirations at the rally.

Roemer was governor of Louisiana from 1988 to 1992; he was elected as a Democrat but turned Republican in 1991  (he must have attended one of those darned Fourth of July parades that year).  He had previously served four terms as a U.S. Representative from 1981 - 1988.

Under Roemer's tenure, Louisiana became a mini-Las Vegas with 15 floating casinos and the influx of video poker in bars, restaurants, and truck stops.  He came under fire several times as governor, once for vetoing a pro-life bill banning abortion in cases of incest, and also for hiring a friend to teach positive thinking to his staff.

Who's not running for president??