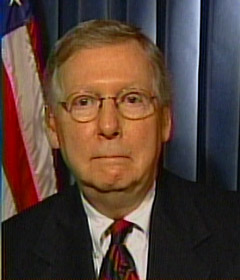 Don't let anyone tell you that average Americans don't care about the debt ceiling debate.  I've been up since 3:30 this morning, unable to sleep, trying to make sense of Mitch McConnell's proposal.

As far as average Americans being involved or connected to the debate?  Let's just say that Obama got the attention of many of them yesterday when he suggested that Social Security checks may not go out next month.  I can't even begin to tell you the fear this struck in my 87 year old mother.  She's panicked and distraught.

As Marco Rubio said on Rush Limbaugh's program yesterday, this ought to put a chill up and down every American's spine:

But let me tell you one thing, Rush, that no one said yet or maybe they have, the fact that payments on Social Security and Medicare may stop is a stinging indictment and a wake-up call.  What Americans should realize, "Hold on a second, my social Security check and my Medicare benefits are borrowed?  The money that you're using to pay for my Social Security are borrowed?  I thought I paid into a trust fund.  I thought I worked my whole life to pay into some system and now you're paying my money back and you're claiming that the money is being borrowed?"  That's what they're basically conceding when they're saying this.

It's a wake-up call for a lot of Americans who weren't paying attention before.  Obama's statement yesterday pulled many into awareness who were not there before.

As far as McConnell's proposal goes reaction is all over the map.  The most succinct summation of the proposal comes from Guy Benson, (H/T: Hot Air):

Now that the table is set, here’s how the proposed plan would work: Republicans in Congress would agree to vote to authorize the president to propose three separate incremental debt ceiling increases, spaced over the remainder of his term. He would be required to couple each request with a corresponding set of spending cuts that exceed the dollar amount of his sought-after debt limit hike. These cuts would be of his choosing alone. The first pair of requests would come prior to the August 2 deadline. It would be for roughly $700 Billion. The next requests, for $900 Billion, would come in the fall, and the final tranche (also for $900 Billion) would be scheduled for summer of 2012 — in the thick of the campaign cycle.

In all likelihood, on each occasion, Republicans would overwhelmingly vote to disapprove of the president’s debt ceiling increase request. This allows GOP members (and almost certainly some vulnerable Democrats) to technically vote “no” on raising the debt ceiling. If, as is likely, simple majorities in both houses vote to disapprove of the president’s requests, he’d be forced to veto each disapproval, pinging the issue back to Capitol Hill. If Congress can’t override those vetos with 2/3 majorities (and Republicans won’t have the votes, even with some Democrats), the debt ceiling will increase. But not without the exacting a substantial political price from the president and his allies in Congress. They will own the debt ceiling hike. Period. Members of Congress who vote with the president will set themselves up to be targeted by brutal attack ads (“so-and-so has voted to increase the national debt limit three times in the last year alone,” etc).

Benson's conclusion is that the whole process is "fuzzy and unconvincing."

Allahpundit sees the proposal as pitching the whole mess back into Obama's court and forcing him to own the whole crisis:

It sounds complicated but it’s not. This achieves two things in one fell swoop: (1) it provides a nearly foolproof mechanism to avoid default armageddon in case the two sides can’t make a deal by August 2, which will reassure markets, and (2) by investing Obama with near-unilateral power to raise the ceiling (it’s not fully unilateral because Congress could, in theory, override him with a 2/3 vote), it makes him almost wholly responsible for the debt hike, which will be a major political liability with the election around the corner and a plurality of voters still more worried about raising the ceiling than letting a default happen. After a month of shrieking from lefty legal experts about how the Fourteenth Amendment supposedly lets O ignore the ceiling, here’s McConnell calling their bluff. You want to own America’s debt problem? Enjoy.

Yet the conservative blogosphere is unconvinced.  Michelle Malkin:

It’s a convoluted way of abandoning the fight for fiscal sanity altogether and leaving the mess in the Democrats’ enhanced control.

Yes, instead of putting the burden on the White House, McConnell would make it damn near impossible to block a debt ceiling increase. We’ve seen this before. The House once had the Gephardt rule that required the debt ceiling vote be attached to a more popular measure so members of Congress could escape a tough vote.

Consequently, the debt ceiling has gone up to $14 trillion without Congress ever having to make a tough choice about debt.

And now Mitch McConnell wants to make it even easier by allowing Congress to go through a dog and pony show of feigned cuts that never get cut while allowing escalation of our national debt. So much for accusing Barack Obama of smoke and mirrors.

My initial reaction is negative, but not as negative as some people.  If the authority were to give Obama the power to increase the debt limit but contingent on equivalent cuts which Obama could choose, that would make sense.

Essentially this is a $2.5 trilliion election strategy, figuring that it is better to defeat Obama in 2012 than run the risk of consequences now which would keep Obama in office through 2016. Because by 2016 $2.5 trillion is going to seem like chump change at the rate Obama is going.

The problem is, standing firm now both is the right thing to do and may be just as good an electoral strategy. We don’t know how all this will play out, but backing down on a core principle which led to the 2010 electoral victory could just as easily fracture the Republican Party and lead to the electoral disaster we are trying to avert.

The professor also points out that Obama would not get his tax increases under this plan.

Jennifer Rubin is actually for the McConnell plan:

What does this do? It shifts the onus to the president to put up the cuts he wants. Moreover, it puts the Senate Democrats in a tough bind. Do they vote against this if there is no grand bargain, filibustering a mechanism that would avoid default? Having failed to present their own budget, Senate Democrats are now on the spot. As for that White House meeting today, I imagine the White House will be none to pleased. Put up or shut up, they are being told. That might not sit well when the modus operandi has been to offer virtually no immediate cuts in private and spout platitudes (peas!) in public.

National Review Online doesn't seem to think Republicans are going to go for this plan:

The Wall Street Journal this morning is backing the plan, insisting that the debt ceiling is going to be raised one way or the other:

The tea party/talk-radio expectations for what Republicans can accomplish over the debt-limit showdown have always been unrealistic. As former Senator Phil Gramm once told us, never take a hostage you're not prepared to shoot. Republicans aren't prepared to stop a debt-limit increase because the political costs are unbearable. Republicans might have played this game better, but the truth is that Mr. Obama has more cards to play.

The entitlement state can't be reformed by one house of Congress in one year against a determined President and Senate held by the other party. It requires more than one election. The Obama Democrats have staged a spending blowout to 24% of GDP and rising, and now they want to find a way to finance it to make it permanent. Those are the real stakes of 2012.

Even if Mr. Obama gets his debt-limit increase without any spending cuts, he will pay a price for the privilege. He'll have reinforced his well-earned reputation as a spender with no modern peer. He'll own the record deficits and fast-rising debt. And he'll own the U.S. credit-rating downgrade to AA if Standard & Poor's so decides.

So where are we after all this?   Mitch McConnell insists this is "a contingency plan," a last ditch effort if talks completely break down.  It appears to me they already have.  At this point, it seems, the debt ceiling will be raised and all the rest is just political posturing.

It's a colossal game of "chicken" on a national scale and all of us are in the line of fire.
Posted by Pat Austin Becker at 6:30 AM

McConnell did say one thing that was dead on. A real solution to the fiscal crisis will not occur while B Hussein Obama is in the White House.

Hopefully the Republicans hold firm on this. What is annoying is Social Security and military checks may not make it out but welfare checks are automatic...how the hell did we get to this?

Now is the time to stand and fight.

McConnell is a ruling class RHINO who must be defeated on this.

The republicans should realize this debt fight for the opportunity it is. We have a wonderful spokesman in Senator Marco Rubio who can speak plainly to seniors. We can also start putting out real ideas to solve entitlements by proposing tax-breaks to the States so they can fund their SS requirements, etc.

Its an opportunity to break the back of Washington D.C.

Scary...Harry Reid just said McConnell has a proposal he can work with...that should scare any sane person.

Hope and change at its best. I hope we all remember this Nov. 2012 but we as voters seem to have a short memory. Pray Obama is defeated.

I think that he is lying. Social Security checks and military checks will go out regardless if debt ceiling is raised by Aug 2 or not.

The Social Security check and military pay should go out...but it is not beneath B Hussein Obama and Little Timmy Tax Cheat to deliberately withhold these payments.

With idiots and liars in charge of the sand box, anything can happen as far as the checks going out, etc.

As I see it the problem with McConnell's plan is it surrenders now, when there's no need to. Oblahblam and the Dhim's already own the deficit, so little to be gained there - and with the LSM licking his boots and peddling his narrative so blatantly, whatever Mitch baby thinks he's planned for them down the road will in all likelihood be somehow "Teflonned" away and laid back on the GOP and Bush and Reagan well before November next year. Go for short term points now, I say, and for once in your life grow at big set of 'em. Tiny Tim is right, though, he is a RINO.