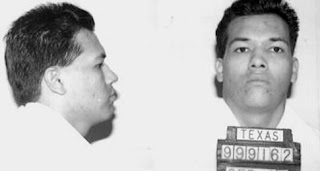 Everyone knows Texas has an "express lane" when it comes to death row.  The next execution scheduled in Texas is on July 7 for Humberto Leal, however, via Pecan Corner, it seems that the UN and the Obama administration are calling on the Supreme Court to halt the execution.  An AP story reports:

The Obama administration took the unusual step Friday of asking the Supreme Court to stop Texas from executing a Mexican citizen convicted of raping and killing a 16-year-old girl.  The administration said the court should delay the planned July 7 execution of Humberto Leal for up to six months to give Congress time to consider legislation that would directly affect Leal’s case.

As it turns out, Leal, a Mexican national from Monterrey, was not advised of his right to consult with the Mexican consulate after his arrest.

The backstory:  In May, 1994, Leal raped, tortured and murdered 16-year old Adria Sauceda in San Antonio.  They had been at the same party and her nude body was found abandoned on a dirt road 100 yards from the party, near a creek, with a piece of lumber with a screw in it still protruding from her vagina.  She had been bitten and the bite marks on her body were later matched to Leal.  She was bludgeoned with a 35 pound piece of asphalt.  Her bloody blouse was found at his home.  He was unanimously convicted.

Supporters of Mr. Leal have a website in which they claim he did not get a fair trial, that his attorney was inadequate, that the victim had been raped by several others while at the party, that Mr. Leal was a victim of sexual abuse by his parish priest and he lived in poverty.  They claim he has brain damage, learning disabilities, and was beaten by gangs and his parents.

On the night of May 21, 1994, 16-year-old Adria Sauceda attended a party on the south side of San Antonio. Witnesses testified that the teenager ingested so much alcohol, cocaine and marijuana she became extremely intoxicated. A group of eight or nine young men took her into the backyard and took turns sexually assaulting her. Anyone who tried to intervene was told to back off.

Sandra Babcock, Leal's lawyer and a professor at Northwestern University Law School, says when Leal arrived at the party and learned what happened to Sauceda he "became very upset and said that he was going to take her home."

Leal says that on the ride home, Sauceda tried to get out of the car. Leal pulled over, she got out, he tried to get her back in, they argued, he pushed her and she hit her head. But Leal maintains he didn't kidnap her and he didn't rape her.

Keep in mind, this case has made its way through the appeals process; he's been on death row since 1995.  And so here we are, very near the execution date, and we have team Obama stepping into the mix.  This is rare but not unprecedented.  George W. Bush also dealt with this issue in the case of Jose Medellin:

The issue then and now is whether the state has to give in to a demand by the president that the prisoner be allowed new hearings and sentencing. In the 2008 case, President George W. Bush made that demand reluctantly after an international court concluded Medellin was improperly denied access to his consulate before his original prosecution, a violation of a treaty signed by the United States decades ago.

John Bellinger, then legal adviser to Bush and currently a lawyer in Washington, said the move by Bush was an extraordinarily difficult but necessary step to take.

We know where Justice John Roberts stands on the issue:

The U.S. Supreme Court agreed with the state at the time, saying the president had no unilateral authority to force the state to comply with international treaties, absent some specific congressional legislation.  To do so, said Chief Justice John Roberts, would violate state sovereignty. He said the International Court of Justice's ruling "is not domestic law."

And even though politics shouldn't matter in something like this, I'm pretty sure the Supremes haven't forgotten the unprecedented beat down Obama gave them at his 2010 State of the Union address.

The question over at Pecan Corner is why now?

His execution date has already been postponed once on this claim: Mr Obama and Mrs Clinton have had an entire year to ask Congress to pass the law they claim to want but Congress wisely chose not to even introduce a bill during all that time, so now they want to use it for a PR stunt.

So which is it? Where did our laws go? What happened to predictable governance?

NPR asked Governor Rick Perry's office for comment but received none, however....

Perry's staff in the past has said, "The world court has no standing in Texas and Texas is not bound by a ruling or edict from a foreign court. It's very important to remember that these individuals are on death row for killing our citizens."

Leal's website cries out for justice, but where is the justice for Adria Sauceda?  When will we tire of illegals killing our citizens?  When will we quit making excuses for heinous criminals and demand justice?

Update:  There's now a Memeorandum thread on this story.
Posted by Pat Austin Becker at 6:11 PM

I wonder if the Adminstration would be as involved in the Leal case if the rumblings for a Rick Perry presidential campaign weren't going on right now.

Maybe to use as a wedge against Latino voters (even tho' the victim in this case was Latina as well) if Perry does indeed get the nod. Pardon my cynicism, but Chicago pols make the Bay State hacks look like cub scouts helping little old ladies across the street.