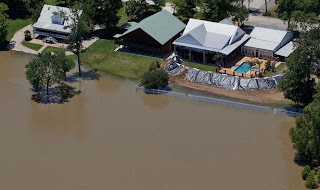 As of this writing there are now 11 of 125 open in the Morganza Spillway; plans are to open 1/4 of the gates.

The Advocate is spreading a bit of optimism in it's latest story as it reports that the Army Corps of Engineers has lowered its projections for the Mississippi:

Jindal said months of drought lowered water levels in the Ouachita and Red rivers, so less backwater flooding is expected in northern parishes.  Drought also increased the soil's capacity to absorb water, slowing the movement of diverted river water that began flowing through the Morganza spillway over the weekend, Jindal said.

Col. Ed Fleming said Monday that the corps also has revised downward river crest estimates due to the spillway opening. The Bonnet Carre spillway near New Orleans also is operating.

A blessing, if it turns out to be so.


NOLA has several galleries of photos.  Jindal may be looking at blessings in disguise, but I doubt these folks feel very lucky: 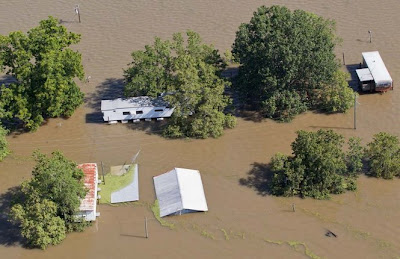 NOLA also has a story of one family from Melville, La. who is making the hard choice to leave their land.  Crops can be replanted, houses can be rebuilt, but lives must be saved:

The lessons of Hurricane Katrina have been learned, she said.

"They didn't die from Katrina; they died from the flood afterward," Thomasson said of those that perished in New Orleans in August 2005 as the hurricane ripped into the city, taking an estimated 1,836 lives. "That is so fresh in my mind! I am not keeping my babies in harm's way when I have a chance to get them out and keep them safe."

Houma Today offers this cool interactive map with flood levels all down the Mississippi (not just La.), photo galleries, and demographic info.

WWLTV has this video of sightseers in New Orleans lining the banks of the Mississippi to see the swollen river.

This is the latest map from the Army Corps of Engineers of the potential inundation: 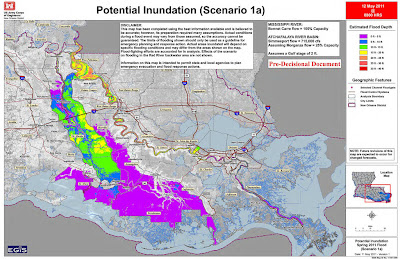 We'll keep an eye on things and update as needed.

It is sure good to know a draught can be a blessing.

I still remember climbing up a levee and looking over at the river and then back at the land.