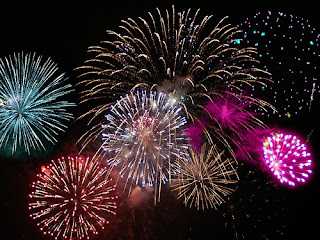 Why is it that I feel like I'm at the top of the Super Slide at the State Fair?

As we get this year started I'm cooking our traditional New Year's meal:  corned beef brisket and cabbage.  I've souped up the cabbage this year with this terrific recipe from The Blue Willow Inn.  I've made it before; it's easy and very good.

I'm watching my neighbor outside with his blower, blowing his oak leaves and acorns into my yard.  Shortly I will have to go outside with a rake and clean it all up.  I've been known to go out there and blow them all back in his yard, but I'm trying not to be petty.

Mr. SIGIS and I were asleep before midnight last night.  We went to Ming Garden and had Pad Thai for dinner then went to our local hangout for its last night (going under new management).  We were home by 9:30.  We like it that way.  It was foggy last night and the streets slick with the humidity.  We saw enough loopy driving on the way home to be glad we weren't out any later.

We are sad that the annual outdoor hockey game isn't on today - it's become a New Year's Day tradition, but it will be on tomorrow instead.  Looking forward to that.

I've been perusing the blogs today.  We'll start 2012 out with some Rule 2 action:

Bride of Rove is celebrating the New Year with a new knife sharpener and some introspection.

Smitty has some predictions for the new year, including "a permanent golfing arrangement" for BHO.

Andy also has some predictions.

Paco offers no introspection and no retrospection, just a prayer.

Doug Ross reports on a challenger for John Boehner.

Professor Jacobson comments on Obama's Middle East position and also links to Andy McCarthy's article that I posted yesterday.  Everyone should read that article.

Enough for now.  I have acorns to rake up.  I'd leave them for the squirrels but no amount of squirrels could eat all those things and besides, they roll out from under me when I walk which is dangerous for a girl with a bad ankle.

A prosperous and blessed new year to you all!

Thanks for the link, Pat.

Have a wonderful New Year!