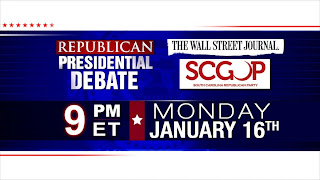 Update 1:   We begin with Newt trying to defend his negative attacks on Romney after vowing not to go negative.  Romney defends by touting his private sector record.  If an Olympics reference is on your bingo card, DRINK.

Update 2:  A "vulture capitalism" question to Rick Perry.  DRINK.   Perry seems a little stiff.  He's calling on Mitt to release his income tax records and gets applause.  Perry calls for the repeal of Dodd-Frank and when he says we have way too many regulations in this country he gets lots of applause.

Romney gets a chance to respond but says he needs more than 30 seconds.  Uh, okay.

Update 3:  Romney:  "You never want to see anyone lose a job."  That ought to play well with his "I like to be able to fire people," comment.  Context or not.   Romney dodged the call for his tax records, by the way.  Why is that?  What's he hiding?

Update 4:   Shift to Ron Paul who comes out swinging on Santorum by explaining he couldn't hit Santorum on everything he wanted to in one single ad.  Ouch.  Santorum says he voted for NCLB and "I shouldn't have."  On right to work, Santorum says he supports it. 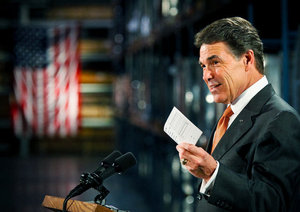 Juan Williams asks Santorum if "barbed personal attacks" should be abandoned.  Dumb question.  Santorum hits Romney with question about a negative ad his PAC ran.  Romney dodges the question from Santorum and says "We've got plenty of time, I'll get to it when I want to."  The crowd is applauding Santorum who is really drawing blood here.  "It's MLK day!" he says.  The question is about felons being allowed to vote.  "I don't believe that people who have committed violent crimes should be allowed to vote again," Romney says.

Santorum calls him on it.  Bam!

Santorum is relentless on this and Mitt is stuttering.

Update 5:  Perry just stuck them both by pointing out that the "Washington insiders" need to get out of it and let the states decide.  Applause.

Update 6:  Fox sets Romney up give a summary of his "conservative" positions.  He's pro-life, he says, against gay marriage, believes in freedom and free enterprise, on and on and on.  Oh, and not a flip-flopper.  Yeah, okay. 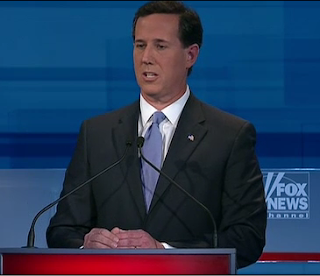 Juan to Perry on the voter ID law in South Carolina.  Are you suggesting on this MLK day that the federal government should not scrutinize the voting laws in states where blacks were once denied the right to vote?

Update 7:  When asked how long someone should be able to draw unemployment checks, Newt says it should all be tied to a training program.  "99 weeks is an Associates Degree!" he says, to applause.  Newt just called Obama "the food stamp president."  Heh!

Update 8: Romney:  our tax rates are too high and regulations too burdensome.  We have an energy policy that doesn't take advantage of our natural resources.  This president has opened no new markets around the world.  Bailouts aren't the answer.

To Ron Paul a defense cuts question:  "what do you say to people in this state" that worry that your positions will cost jobs?  Paul says we would not be weaker under his policies and says he gets lots of donations from active military.  "There's a difference between military spending and defense spending," Paul points out.  Building embassies is not defense spending "it's waste," he says.

Question to Mitt:  "Will you release your income tax records?"  Romney says he looked at what other candidates like Bush and Reagan did, they released in April.  He'll probably do that in April, then.  He's stammering on this a bit.  "What's happened in history is that people released them in April and that's what I'll probably do." 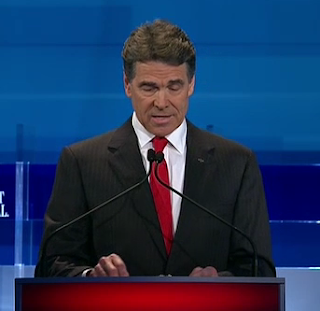 Update 9:  Why is every question from Juan Williams race related?  He's asking Ron Paul now about disparate numbers between arrested blacks and whites.

Next he goes to Newt and asks if he could be perceived as anti-black.  "Only the elites despise earning money," he says.  Juan says people of all races ask him if Newt's comments are "anti-poor."  Juan gets boo'd.  "It sounds as if you're trying to belittle people," when you use the term "food stamp president," Juan says.  Newt schools him on political correctness and using uncomfortable facts.  The crowd stands and applauds.

Juan should be under the desk about now.

Update 10:  Ron Paul gets to spend a long time rambling about his foreign policy position.  He sounds nuts.

Newt is strong on the Bin Laden question - "He's not a Chinese dissident!"; in other words, you kill your enemies.

Update 11: Rick Santorum does not support a military mission into Syria but wants the international community to help remove Assad. 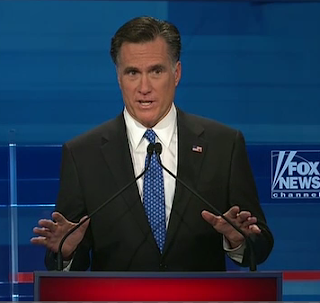 To Rick Perry:  "Does Turkey still belong in NATO?"

He advocates cutting foreign aid to zero.  "Our president has a foreign policy that makes our allies very nervous and emboldens our enemies."  I'm not sure he answered that question, exactly.

Perry has mentioned his military service several times in this debate.  Somehow the marine urination video comes up here.  He blasts Biden for calling those Marines despicable, and he says "Let me tell you what is despicable: cutting Danny Pearl's head off" is despicable.  Hanging our contractors from bridges is despicable, he says.  Applause.  Perry suggests that this administration has strong disdain for our military.

Update 12:  When asked if he would have signed the national defense act as written, Mitt says yes.  He gets boo'd.

Pivot to the housing market - Perry basically says to get the federal government out of it.

To Newt - a Social Security question.  The Chilean model comes back out.

Romney agrees with Santourm:  "Rick is right," he says.

Update 14:  A gun owners question for Romney from Juan.  No race baiting on this one.  "How can you convince gun owners you will be an advocate for them?"   Mitt says he's signed pro-gun legislation in his state.  He disagrees with new legislation and does not believe in new laws restricting gun use and gun owners.  Juan asks Mitt if he's gone hunting since '07.  Yep - elk hunting, he says.  Heh - Romney says Rick Perry is probably a more serious hunter than he is.  Perry agrees.

Woah.  Newt just jabbed Romney saying if he can't control his SuperPAC "it makes you wonder how much influence he would have as president."  Random.

Final update:  We end with Romney disavowing SuperPacs and Perry vowing to secure the border.  Who won this one?  Man.  Tough one.  They all had strong moments.  To my mind, though, this is the first time Romney took any hits.  Perry continues to improve.  Newt was strong as was Santorum.

Newt did a verbal bitch slap on Juan.

From all those years of being a cop, and you know this, you learn to watch how people act and how they say things rather than what they say.
That's how I know when people like old Dick Gephardt was lying through his teeth when he would tell his stories about people, like the airline pilot who came back to the cabin from the cockpit to tell him how bad things were.
And how Hillary would tell her little stories that were along the same line as old Dick's.
I knew they were lying because of the lack of inflection and conviction in their voices.
It was like they were pulling the story out of their rearends as they were going along.
The next time you watch Juan Williams on the panel for the FOX Report with Bret Baier watch his body language. Its than what is coming out of his mouth. He's full of s%^$ and he knows it.
Especially watch him when Charles Krauthammer challenges him. Jaun will sit there and nod agreeingly with Charles.
And don't get me started on eye postitions. You can tell usually when someone is legitimatley trying to recall something or pull it out of their behinds.