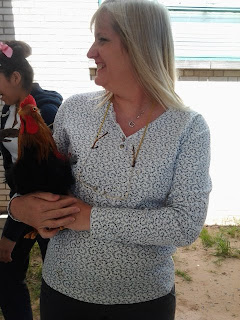 I'm getting sick.  I'm so disappointed.  I wasn't going to mention it for fear of breaking the good luck string, but I missed out on getting the "fall crud" this past fall and up until now I thought I would skate on the "spring crud" too.  I was getting worried that my ENT guy might forget about me.  I guess I'll be visiting him soon.  Meh.

I've been in a funk this week after a local election this week for the schools.  For you non-locals, there were 3 issues on the ballot.  One of the three passed.  The one that passed is designated for building new schools and upgrading existing structures.  My school will benefit from this as every time someone on the first floor turns on their electric heater all the fuses blow and the custodian has to change it out and restore power.  We're long overdue for an electrical upgrade, especially to accommodate all the technology that  is now running through this very old building.  So that was good.

What didn't pass was the five percent teacher pay raise (we haven't had one in seven years; I'm bringing home less now than I did just three years ago) or the technology upgrade.

I'm not going to get into my emotions on all that right now; I'm toying with a post on it but I'm not ready to go there yet.  I'll just say that though there were a lot of people in support of the teachers, there were plenty of nasty comments made that really disheartened me.  One person left a comment on a local news article that suggested teachers should "just eat less and not drive such fancy cars."  He said every teacher he knows is driving a Lexus or some other expensive car.  I'm not even going to go there.  There's an idiot in every crowd.

But, I've been disheartened and discouraged.  Governor Jindal is coming after us with everything he's got and now the local voters have smacked us.  Teacher morale is low low low.  But,  HEY I'm about to get  THE WHOLE SUMMER OFF.  Not.  Anyone who believes that malarky is in need of counseling.

But, what has made me feel better this week is my kids.  I just love my students.  That's another post in itself, too.  But I've had great kids and that's what keeps me going to work every day.  One of my former students took the picture above today outside at lunch of me and her stuffed rooster (kidnapped from the art teacher) Pancho.  I'm not sure if his name is Pancho, but that's what I called him.  We have great kids at my school.  Love!

Elsewhere on the web:

Stacy McCain is following the trail of Trayvon Martin related attacks.  What the hell is wrong with people?  My god.

A Cop's Watch is also on the trail.

Ed Driscoll has an alarming wrap-up on the whole thing.

However, Adrienne has the most compelling story I've seen today in defense of the Second Amendment.

Is the secret to a great presidential legacy all in one's alcohol intake?  Pirate's Cove reports.

In the spirit of Holocaust Remembrance Day, let me again point you to my friend Nico Van Thyn's blog; he is the son of two Holocaust survivors and has been telling their story.  I had the privilege of meeting his parents several times and am glad Nico is recording their history.  Please read.

I'm off to take some cold meds, some allergy meds, and some more vitamins just to cover all my bases.

Airborne, too (after all it was created by a teacher for other teachers) We always get the Walgreen brand when it's on sale and save a ton of money.

You look positively dazzling in that photo. Nice rooster...

I know it doesn't help, but San Diego teachers are getting pink slips for the third year in a row. Massive layoffs at all levels of primary education. Two more elementary schools closed this year, although it looks like one will get a reprieve. I don't know where our nation is headed.

Ma'am, in the "What the hell is wrong with people? My god", you must remember that, for 40v years, the Left has indoctrinated black Americans that the days of Jim Crow never ended, they are still oppressed, and, while the Left is on their side but apparently helpless - despite holding super majorities in both Houses of Congress for 2 years - to change things, they are justified in taking the law into their own hands.

They hear this in the media - both entertainment and news, they get it in the public schools, and see the leaders of this country encourage them to do so. It's a miracle it isn't worse.

WOW! Look at the hot chick in the picture!