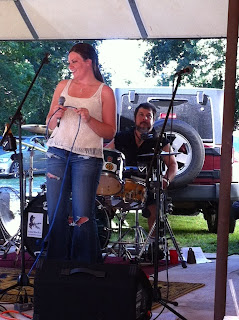 One of my standard rules of thumb is to take my camera with me wherever I go because, well, you just never know when you'll wish you had it.

What was I thinking yesterday when I left it at home?  After all, it was just a little top-down in the Jeep drive along Cross Lake, a spontaneous stop for lunch, and a birthday party at The Cove on Cross Lake.  Why would I need a camera?  My cell phone has, of course, a wonderful camera but the sound quality for video on it isn't so great which is what I really missed.

Who knew I would become an instant fan of the music of the Soulfish Blues Band?

Never leave home without the camera.  Ever.

Anyway, yesterday was our first real day of fall temperatures so we pulled the top down on the Jeep and decided to take a drive around Cross Lake before this birthday party we'd been invited to at The Cove.

Cross Lake is really pretty and we've been out there quite a bit since joining the American Legion in May.  I've posted some nice shots taken from the Legion.  I like this one: 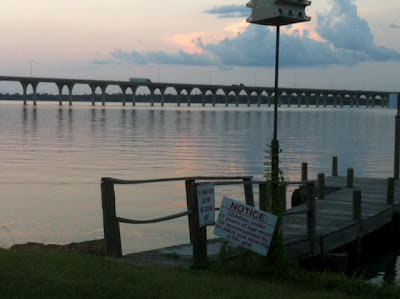 Yesterday we just drove to see where the road would take us and we ended up in Longwood.  We were both ready for a Coke so we stopped at the Longwood General Store and Truck Stop.  And casino. 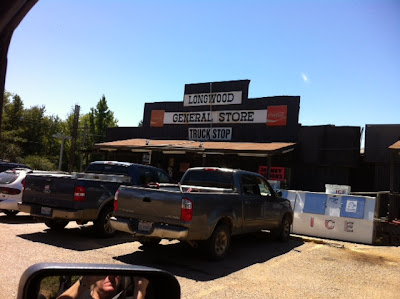 There's a big ol' front porch where you can sit and watch the cars go by: 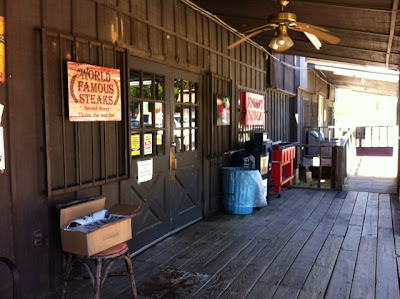 We didn't realize it was also a restaurant when we stopped, but sure enough, there's the sign:  "World Famous Steaks."

It's the kind of place where you sit next to the 409 and the Brillo Pads while you eat your "World Famous Steak": 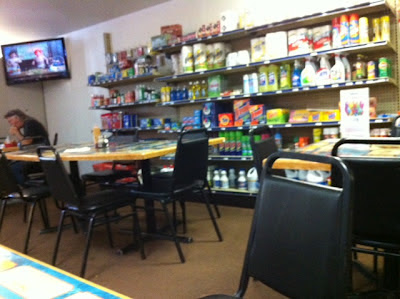 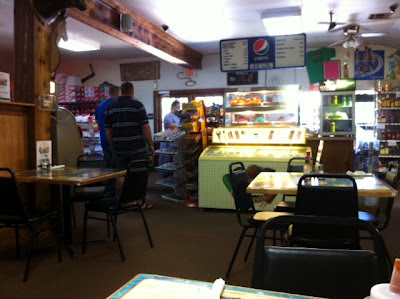 I opted for a fish sandwich which was really good. 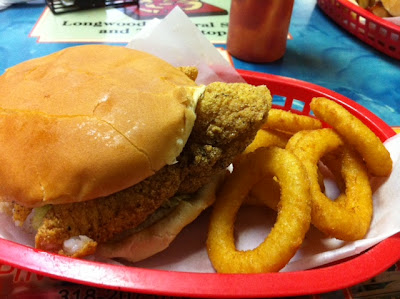 Steve had a bacon cheeseburger.

After our spontaneous lunch we headed to The Cove.  The Cove is one of those neighborhood clubs that has been there forever.  It's right on the lake and sits on a beautiful piece of property.  You can get there via car or boat. 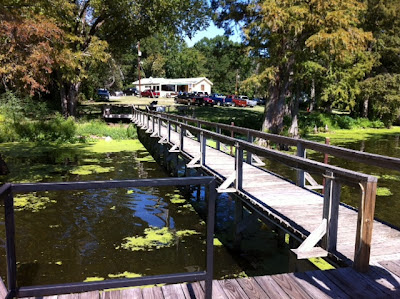 We had been invited to the birthday party of a friend of ours from the Legion and things were in full swing when we arrived.  Most folks were inside watching The Saints on TV but the weather was so nice, we sat outside amidst the smoke from the two grills.  They were busy grilling chicken, pork chops, sausage and burgers. 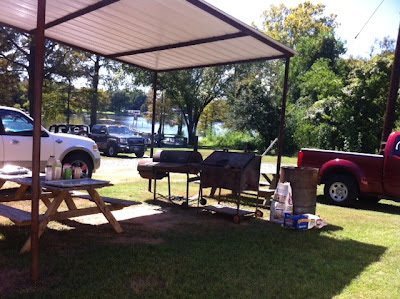 After the game, the Soulfish Blues Band set up on the patio outside and played until after dark.

I'd heard of Soulfish before and I think I may have heard them at last year's Highland Jazz and Blues festival.  Actually, I think I was at the other end of the park listening to someone else when Soulfish played the Highland because I'm certain I would have remembered them.

When Julia Dunning started singing yesterday I was amazed.  Just amazed.  This girl can belt out covers of Janis Joplin, Aretha Franklin, Adele...you name it, she's got it.  I don't even like Janis Joplin but I liked it when Julia sang it.  She's got the kind of voice that gives you chill bumps when she hits those certain notes and she belts 'em out strong and loud.  Go here and listen to the "Rollin' in the Deep" cover; if you don't get chill bumps at 1:03, check your pulse.  And if you can stand one more cover of "Unchain My Heart," listen to that one, too.  Her voice is especially suited for that one.

I'm not sure how old Julia Dunning is, but she sings with the confidence and poise of an experienced torch singer.  The Soulfish website tells me that Julia Perrodin Dunning has been singing since she was two years old.  All I can tell you for sure is that she mesmerized me with her vocals and on-stage charisma; one thing that I really thought was cool is that she made it a point to walk around between sets and speak to folks.  She came over to our table and thanked us for coming and visited for a few minutes.

This is where I wished for my video camera.  All the video I shot on my phone just didn't capture the sound very well.  I'm going to post this one I shot of "Sixteen Tons" but it still isn't as good as they actually were:

Julia has some serious musicians behind her:  Gary Huntsman on lead guitar does masterful work and Bill Allen on bass is excellent.  Both of them have strong resumes and are a perfect fit with this band.  On drums is "the pride of Zwolle," Bruce Procell.  He was glad to come out and talk to the crowd too, between sets.

The band's website is here.  Facebook is here.  They'll be playing Texas this weekend:  Friday night in Kilgore and Saturday in Marshall.  We will catch up with them next on 9/28 again at The Cove.  They have a busy schedule and you won't have trouble finding them.  It's well worth your effort.

We finally left The Cove after the last song and headed for home.  We hadn't intended on staying that long but just couldn't make ourselves leave until the music was done.  The cool, crisp air felt wonderful on the way home with the top down and we hated to park the car and head in, but work today beckoned.