Book Review: "The Courage to Rise Again - A Journey from Tears to Testimony" 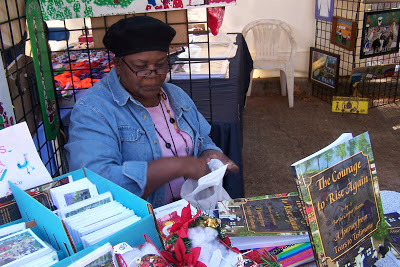 Several years ago when I was at the Highland Jazz and Blues Festival I met Bertha Cooper Harris.  It was 2008 and she had a vendor tent set up in which she had some of her work for sale on display.  I bought a
"gift tag" which I actually use as a Christmas ornament.  I admired her work at the time and have looked for her to return to the festival each year.

This year she was there and I bought another ornament; this one is a red glass ball with one of her figures painted on it.  I love it!

I also bought her book which came out this year: The Courage to Rise Again -  A Journey from Tears to Testimony.

Mrs. Harris has a compelling life story.  She was born just outside of Homer, Louisiana in Claiborne Parish.  She was the eighth of nine children and grew up in a live of poverty and struggle.  The family lived on "Cooper Hill" surrounded by grandparents and other relatives and for a child, lots of good times.  When Bertha was around seven, her father died; it was not long after that Bertha's mother moved to a chicken and dairy farm to find work so she could support her family.

Bertha was exposed to violence and abuse at an early age when her two brothers were forced to endure beatings and abuse by Mr. Hunter, who allowed the family to live on his farm in exchange for work.  Their living conditions were deplorable.

Eventually the family ended up on Beene Plantation in Bossier Parish where they picked cotton.  It was hard, back-breaking work and it did not take long for Bertha to figure out that she wanted more out of life than picking cotton.

As if life in extreme poverty and hardship was not challenge enough for one soul, Bertha later endured an abusive marriage, domestic violence, and even later, years of sexual harassment in the workplace.

Through it all, she found the courage to keep fighting back and to win. 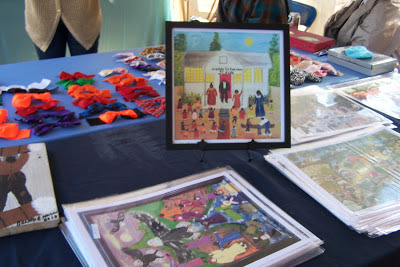 I don't want to give away everything here, but suffice to say that Mrs. Harris writes a gripping, page-turner of an autobiography and I found it hard to put down.  I found myself feeling protective of her when her husband beat her and rooting for her when she was determined to finish high school and continue her education.  I felt her loss and heartbreak when she was separated from her sister, and her pride when she achieved success in her work at an insurance company.

Through it all, the book is a portrait of the life of many black Americans in the rural South who faced extreme poverty and prejudice.  It is also a portrait of a strong, courageous woman who fought back against the wrongs she faced.  She has strong words of advice and wisdom for women subjected to domestic violence and for victims of harassment.

Fans of author Lalita Tademy's Cane River  will be fans of this book.

In the small section of the south, where she was raised, many conditions had not changed much since the end of the Civil War when she was growing up. Tenant farmers and black farm families were practically owned by the family plantations where they worked. Escape from this bonded servitude was exactly that. Many families were always in debt to the plantation store or the owner. Her family was unique in that her grandparent’s family owned their own land. However it did not make them exempt from conditions of those around them. And certainly Bertha’s life may have been a snapshot of history in many respects.

Berrtha’s struggles to advance in a world where she felt she had little control against forces of bigotry, sexual discrimination and harassment is parallel to struggles that existed throughout the country, only the names and places were different. Her journey to overcome these forces was often a struggle for survival. The story of this struggle should assist those who struggle today with the complex values and apparent glass ceilings in life and the work place.


And almost as a side note, we have the art.  In 2003 Bertha Harris began to paint.  She is a self-taught folk artist many call "the next Clementine Hunter."   Her pictures show a simpler way of life often reflecting family scenes and her early memories of life on Cooper Hill.  One of my favorite paintings is of William Chatman School (which I've ordered from her website!) but I love the one of life on Cooper Hill too for its pure joy of living.

Her book is filled with illustrations of her work.

You can buy the book here which would make a great Christmas present, by the way, especially paired with one of her prints.

Bertha is also on Facebook.  And of course, here is her website.
Posted by Pat Austin Becker at 4:23 PM