It is the calm before the storm election.

Maybe "calm" isn't the right word.  Have you seen the photos of the Romney rallies?  This one is from Pennsylvania today: 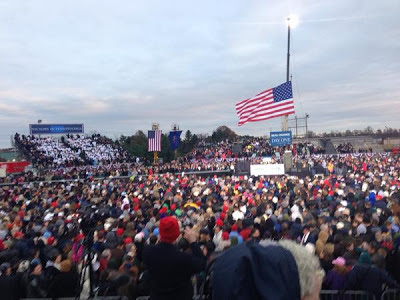 Certainly everyone in coal country should pay attention to this unleashed EPA.  The agenda is just chilling and is certain to doom the American economy for good.


Titled “A Look Ahead to EPA Regulations for 2013: Numerous Obama EPA Rules Placed on Hold Until After the Election Spell Doom For Jobs and Economic Growth”, it lists and describes new rules concocted over the past year ranging from additional restrictions on greenhouse gas emissions, tougher water guidelines and tightening of the ozone standard. Taken together, they will further drive up pump prices, impose construction bans on local communities, and cripple oil, natural gas and coal production.


In sum, Larry Bell outlines what we can expect:

Greenhouse gas regulations will be so regulated as to basically eliminate coal.  The emissions standards will apply to even the smallest church, school, and farm.  "The cow tax" will apply to some 37,000 farms and affect 90% of the livestock population in the United States.

(Think that'll drive up your food and energy prices much?)

The EPA is just one of some fourteen bureaucracies working to regulate and eliminate hydraulic fracking.  The EPA will dramatically expand the Clean Water Act and increase regulatory burdens on the states.  There will also be an expansion of regulations on storm-water systems which will require expensive retrofitting on storm water sewers and severely increase the cost of future development.  New gasoline regulations will limit the amount of sulfur in gasoline which Bell says will add at least nine cents per gallon to your gas bill.

EPA’s Boiler MACT (Maximum Achievable Control Technology) standards are so strict that not even the best-performing sources can meet them, so many companies will have no choice but to shut their doors and ship manufacturing jobs overseas. The rule has been projected to reduce U.S. GDP by as much as 1.2 billion dollars and destroy nearly 800,000 jobs.


Can't wait to see what THAT does to the unemployment numbers.

Read Bell's article because there are many more regulations there including the infamous Farm Dust regulations and cooling tower regulations.

If just half of these kick in we are still in a world of trouble.

Coal miners and coal powered plants already have a big problem, as we have pointed out repeatedly. But it looks like those problems may grow by several orders of magnitude in the coming months if the current White House occupant remains in office. The President has already been seen to bristle at criticism from his own Left flank over how he hasn’t done enough for the environmentalists who can’t understand why the oil companies are still in business four years later. Unrestrained by the need to win another election – having a lot more “flexibility,” as you might hear from Vladimir – these folks can really run amok.


Even the most far left liberal has to see that these regulations will be the death of American business and energy development.  We must have a strong petroleum industry and this will never happen under these expensive and burdensome regulations.  You can't fill your gas tank with wind, and you can't charge your electric car without electricity (which relies, of course, on coal).  Our power grid is already strained and in trouble.

We can't afford another term of Obama unleashed.

That Forbes article was an especially nice find. I put a link up to it at my own blog-- with h/t to you of course.

Don't worry, though. The odds of a 2nd Obama term are very, very slim.