Teacher Morale Across the Country Plummets 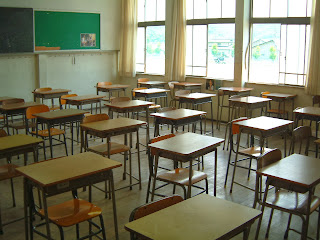 Teachers in the state of North Carolina, and probably lots of other states if truth be known, are demoralized and depressed.

After North Carolina recently passed legislation that eliminated teacher tenure, halted teacher pay raises and initiated a statewide school voucher program, a new survey reveals that the state's educators are extremely frustrated with the way they are being treated.

The online survey, conducted by University of North Carolina Wilmington professors Dr. Scott Imig and Dr. Robert Smith, asked over 600 North Carolina educators about their feelings on topics like recent changes to state education policy and teacher morale. Overall, the results of the survey, which were not based on a scientific sampling, are less than encouraging.

Of the teachers surveyed, 96 percent signaled that they “think public education in North Carolina is headed in the wrong direction,” while 97 percent of those surveyed said they thought recent “legislative changes have had a negative eﬀect on teacher morale.” Even before recent legislative changes, North Carolina educators were some of the lowest paid in the country.

Teacher morale is the white elephant in the room when it comes to "education reform."  As the experts focus on how to improve test scores and school report card scores, too often the blame focuses on the teacher.  If a child isn't learning then the teacher must not be doing something right.  None of the magic bullet answers to solving today's educational woes focus on the teacher except in a punitive way.  All of the onus for improvement is on the school administrators, passed on to the classroom teacher, yet no new accountability is placed on the student or the parent.

Simple fact:  no amount of Kagan strategies or Harry Wong magic will improve test scores and performance when parents are not involved.

Nobody denies the benefit of parental involvement.  Study after study supports this.

Obviously parental involvement varies across socio-economic backgrounds; What of the parent who is working two jobs just to keep the electricity on?  How much time does that parent have to come volunteer for the PTA?  What about that child whose only parent is incarcerated and the child is living in a hotel with a relative?

There are so many variables to consider.

So too often it's just easier to blame the teacher.  Let's accelerate the professional development, they say, and put these teachers in meetings to learn how to better reach kids like this.  Let's assign readings for teachers to do in their down time.  Well, okay.  No teacher, no good teacher, wants to leave any child frustrated and without hope.  All good teachers are open to learning new ways to reach students and help them achieve.  Frustration leads to behavior problems; behavior problems contribute to low academic success - not just for that misbehaving child but for all the kids in that particular classroom.

Professional development is fine and welcome.

The point is, teachers are trying.  Teachers go into those classrooms every day with the single goal of reaching that one child who is struggling.  Teachers want every child to succeed.

Teachers teach because they love what they do.

Where the teachers in North Carolina, as well as other states, are frustrated is that they feel "devalued."  The punitive evaluation rubrics required with the adoption of the Common Core standards puts in place an evaluation system which is designed to keep the majority of teachers from attaining a perfect score.  In many states teacher pay is tied to these rubrics.  Again, it's not about the money; the demoralization comes from being devalued.

“Everything has been put into action to be accomplished by the teachers and the schools. The entire burden is on us.--- In all the newspapers and press releases and theories proposed, the idea touted is that if the teachers change, improve, comply, then students will progress better than ever before. First, this idea is insulting to all of us because it negates what we have accomplished in all the years we have taught. Second it is a faulty “if/then” because there is MUCH, MUCH more to the equation than just teachers teaching. The unspoken issues that no one wants to utter are these: 1. Despite our best efforts, in reality some students are simply more capable than others, as is true and has been true for time and eternity in every place on this earth. 2. Many, many students have unconcerned parents who have, by the very nature of their faulty parenting handicapped their children long before they enter school. If I remember my educational psychology, the first three years of a child's life are pivotal ----- Many children are not being spoken to, read to, introduced to concepts and ideas in those years. Their learning only begins when they enter school, and at that point, a large deficit already exists. Even than, many parents don't concern themselves about homework, tests, projects or valuing school. I am weary of hearing “Every child deserves a great teacher”. How about “Every child deserves a great parent?”


Can you feel that teacher's frustration?

Diane Ravitch posted this letter from a frustrated teacher:

I am exhausted from trying to figure out what to teach for the next county test……then state test.

I am tired of the CLAWS that come at you and the Ugly Faces of the Powers that be when your class of 33 can not make an A on one of those SO BAD BAD TESTS!!!.

Those “Frowny Powers that Be” people may not know it but they will die early and have so many wrinkles form those Ugly Ugly Facial Gestures!!!

I am so tired of the hiring of all of the coaches that nag and nag and nag the veteran teachers and pretend to know more…but they do not..

I am tired of the Professional Learning whatevers where teachers discuss TEST SCORES for a kid with a 58 I.Q….while an administrator that has never taught more than one year takes notes back to the Super Powers…or they have some person whose position has been created to sit there and take notes to take back to the Super Powers.

This plan pushed through against the good advice of many knowledgeable people is ludicrously full of erroneous assumptions and unattainable goals. There is no way that it is a just and fair practice to put in something that is still evolving into motion and expect immediate proficiency to the point of using it as a ranking and punitive measure.---- Additionally the rubric itself is worded so that it is near impossible to get a 4 rating, to get the huge “carrot on a stick stipend”. The very creator of the rubric has admitted that earning “highly effective” several times in a row is highly unlikely. To earn a 4, students basically have to be in charge of the classroom.


Louisiana has delayed implementation of some of the Common Core and COMPASS elements in order to address some of these concerns:

For the next two years, schools will be graded on a curve, not by absolute test scores: The distribution of grades will stay the same as they are now. While the specific formula for the curve remains to be determined, the 2012-13 tests showed 43 percent of schools were graded A or B, and 8 percent were graded F.

The Louisiana School Boards Association and Louisiana Association of School Superintendents had asked to suspend school grades altogether for two years. A BESE motion to do that failed, 2-9. Metairie member James Garvey said good schools deserved to keep their hard-won A and B grades, and Stephanie Desselle of the Council for a Better Louisiana said families needed to know how schools were performing.

Under the Compass evaluation system that went into effect this past year, about one third of teachers are evaluated based on "value-added" statistics that measure actual student test scores against how the student, based on past scores, was expected to perform. It's been a major bone of contention between White and the teacher unions.

But White is now taking the issue off the table, saying he agreed with educators that value-added scores were meaningless when the tests were changing. For two years, the state will not issue those calculations, and local school systems will measure student growth through other means.


But teachers are still being evaluated under those rubrics and so when a good teacher gets a lower-than-expected score, morale plummets.

How is it fair for teachers of core subjects to be graded on the VAM model and other teachers not?

Maybe those teachers in those low performing schools should be valued even more for their commitment to the low achieving and struggling student - that student who despite all the odds stacked against him continues to try to achieve something nobody in his family has done before:  graduate.  Maybe those teachers should be encouraged for their commitment and dedication.

But, no.  Instead, those teachers are told that they work in a "D" or an "F" school and it's their fault.  They're told it's better to teach in a low performing school because then the only place to go is up!  Rationalizations.

No wonder morale is low.

Are there bad teachers?  Of course there are.  And good administrators get rid of them; tenure or not, a bad teacher can be terminated.

Education reform is a topic that will continue to be debated and tested.  The simple fact is, there IS no magic bullet.  The bottom line is that the federal government needs to stay out of education, leave it to the states as intended, and let good teachers do their jobs.  Stop implementing fad curriculum and standards requirements that take all the creativity out of the classroom; stop making students have to perform like robots, stop making education all about accountability, and above all, stop killing the souls of your teachers by telling them what failures they are.