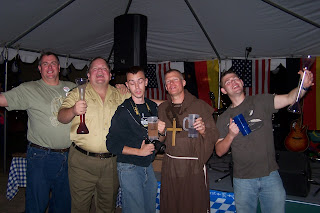 Barksdale Air Force Base put on an Oktoberfest celebration this evening and I can promise you that it is a brand new tradition in the Shreveport-Bossier area! What a hit it was and what a fabulous time the folks had! I am full of exclamation points and "ohmigods" so I'll try to rein myself in and just tell you that we had a great time and how the Base did a GREAT job

We arrived around 5:45 (it started at 5:30) and the beer lines were already WAY long. A good crowd was already in place. Steve

and I got in the (very long) beer line but before long a Jessica Simpson look-alike waitress/frauline person came, took our tickets and brought us beer, thus saving us from the long line. There was a German Oompah band playing and if I had to compare them to anybody it would hands down be the Bare Naked Ladies; from their playing style to their crowd-shout-outs. They played plenty of German beer drinking music and toasts as well as lots of contemporary stuff (and I mean contemporary by MY day - not now.)

We had dinner (brats. saurkraut, potato salad, etc.) and more beer. They had a GREAT Samuel Adams Oktoberfest on draft. Awesome. At one point I had a mug in one hand a "half-yard" in the other. (After you stand in the beer line for 45 minutes you learn to plan ahead.)

At any rate, BAFB did it right. The DJ was great, the band was great the atmosphere and decorations were great. There was a brat eating contest, beer stein races, a costume contest, a German Shoe Dance contest, a yodeling contest, a beer drinking contest (which I would have entered had I not had a head start) and lots of good fun.

What I loved most about it, probably, was the poignant moment of the evening when the toast

was raised for the Raider crew that was lost this summer over Guam-- the crew that won't be coming back. I love the heart of the military and the soul of those that serve. Some folks left their dinner this evening to go to the tarmac to welcome back a crew that was coming in from Anderson AFB. It was very moving when they were mentioned tonight.

I walked up to take a picture of the band and of course they stopped playing and the lead guy goes, "Picture!!!" and they posed -- . And then at the end of the night the DJ came back on while the Oomaph band packed up; he started with Maragritaville and then Living on a Prayer and ended up with Thriller and we were all doing the Zombie dance. Even the fraulines in their german waitress costumes. Oh it was fun! We had a blast and can't wait until next year!!
Posted by Pat Austin Becker at 12:17 AM

Like Pat, I will have to control myself, because there was just so much to write about tonight's Oktoberfest on Barksdale.

Tonight's Oktoberfest was probably as much fun, in one respect, as the one I went to in Munchen (Munich) years ago as a young, single airman stationed in Germany. I say that because this time I was sharing the moment with someone I dearly love, and that makes a big difference.

But for a little while tonight I was back in Munich, under the large blue and white checkered Lowenbrau tent, eating German food, drinking German beer, and listening to a Oompah band. "In celebration of the abundance of the harvest."

Another person having fun was one of the "frauleins"(the one pictured in this blog.) who was helping in serving beer. She was cute, and what made her cute was she was constantly dancing and having so much fun.

The young "fraulein" had entered a beer drinking contest, where they were drinking from the 1/2 yard glasses, but she didn't finish her beer prior to entering the yodeling contest.

She was still holding the beer, and the announcer made mention of it. She finished drinking the beer and yodeled, "I need a beer, please bring one here, cause I need a beer!"

Another funny moment is when the Pat took the picture of the band. I laughed until I had tears in my eyes.

Pat said she wanted to take a picture of the band. She walked up close to the stage and put the camera up to take the picture, and one of the band member saw her and yelled "Picture! They stopped playing the song, posed until Pat took the picture, and they resumed the song where they left off. It was absolutely funny.

The whole night was really fun filled and glad that Pat had a great time. I too can't wait for next year.

But like Pat, I was touched by the Wing Commander's few words. With those words we were reminded that without the men and women who serve to protect our freedoms, what we did tonight wouldn't have happened.

Col. Wheeler also asked us to remember the B-52 crew that was lost this summer, when it crashed into the ocean off Guam.

So here it is. God Bless the crew of Raider 21. Even though Pat and I never had a chance to meet you, we missed you guys tonight, and we lift our glasses in a toast to each of you.