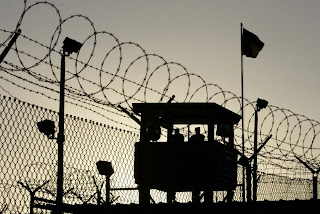 A couple of things have surfaced this week on the Gitmo debate that I've found interesting. It has long puzzled me why all the fuss has been about only Gitmo, and that's the only prison you hear about in the press, but nobody is really talking much about any of the others.

We have over 630 prisoners at the Bagram base and they are crowed into small holding areas in much less comfortable conditions that those guys at Gitmo. No exercise yard, no art lessons, nothing. Maybe it's because of the fact that we are building a new $60 million prison there to hold them. Eric Schmitt wrote about the Bagram prison this week outlining some questions the Obama administration must deal with, such as the new Bagram prison, the continued construction of which he suggests "would also signal a longer-term commitment to the American detention mission."

Since we quit transferring prisoners into Gitmo in September 2004, the Bagram population has increased rapidly. An expanded operation in Afghanistan will certainly add more. To alleviate over crowding, in 2005 we began transferring some Bagram prisoners to an American financed high security prison outside of Kabul. This prison is guarded by Afghan soldiers.

Another interesting item came up this week as well when a Gitmo military judge, Col. James Pohl, rejected the delay ordered by Obama for military tribunals. The judge ordered the government to proceed with the case against Adb al-Rahim al-Nashiri who is accused of planning the attack on the USS Cole in October 2000. In fact, Congress has already twice addressed the structure of military tribunals, so Pohl is only acting on current law.

In a briefing that same day, a Pentagon spokesman said that they "will be in full compliance with the president's executive order...And so while that executive order is in force and effect, trust me there will be no proceedings continuing down at Gitmo with military commissons."

Well, what does that mean, exactly? Will the exective order be rescinded? Doubtful. Will charges against Nashiri be dropped? Horrors! This would not be popular. Maybe the answer would be renditions.

In the executive order, Obama left open the option for renditions which the Bush administration took a lot of criticism for. There were a couple of ugly incidents that hit the media and make human rights groups unhappy. Renditions are secret abductions and transfers of prisoners to countries that cooperated with the United States; THOSE countries get to torture the prisoners or gather information by their own means, and then share the information with the United States. The problem of course is that we can't guarantee what other countries will do to gather information or how that prisoner will be treated, or how much of that information gathered is actually shared.

In a Los Angeles Times article today, one former CIA official points out that "In some ways, [rendition] is the worst option," the former official said. "If they are in U.S. hands, you have a lot of checks and balances, medics and lawyers. Once you turn them over to another service, you lose control."

It is a fact that you can't have a war without taking some prisoners and now Mr. Obama is charged with determining what to do with those prisoners. He may be gaining a better appreciation of what Bush was going through and what it means to keep the country safe. It's hard to do it all and make everyone happy. The fact remains that when you consider the other options, Gitmo hasn't been such a bad deal in past years.
Posted by Pat Austin Becker at 9:25 AM

Gitmo hasn't been such a bad deal?

Ok - I think the focus has always been that Gitmo has been the prison built SPECIFICALLY to hold prisoners and then deny them their right to trial.