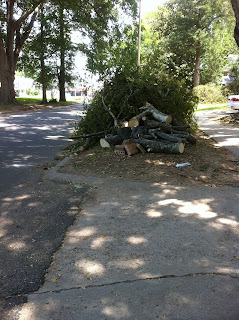 I'm too grouchy to blog today.  Ever have one of "those days"?  I'm on vacation!  I shouldn't be this ornery!  I can't even blame it on unruly teenagers!

I had to go to the doctor today for simple lab work for my annual checkup.  I had a 10:00 appointment to get blood drawn.  I had to wait 30 minutes and then the tech couldn't find the vein, had to stick me twice and now I'm bruised.

My neighbors (whom I like very much and we're good friends) had a tree trimmed.  A big one.  This was a necessary thing.  But the dumb trimmers stacked the limbs on the city property 8 to 10 feet high and the length of the property and now I can't see to back out of my driveway.  I called the city to see if they could pick them up and was told I'd be put "on the list."  The dreaded list.  The neighbors on the other side of this neighbor have been "on the list" for three weeks.  They had to cut up a tree that fell during a storm three weeks ago.  Those limbs are all dead and brown now.

Well, so I called my neighbor and asked him if he could call the city also and that might speed things up.  He said the tree guy is going to pick them up but it might be a week.  Might be tomorrow; might be a week.  Meanwhile, we have to park on the street so we can come and go, or else have someone else run interference when we back out of the driveway.

Normally things like that I just take in stride and don't get ruffled.  I'm very easy going.  But my street is pretty busy - people use it as a cut-through to avoid a busy traffic intersection nearby.  Can't see around the limbs.  Gonna get hit.  Danger.

So I get online looking to distract my aggression and it only gets worse.  Obama and the Democrats continue to run this country into the ground.  What is he thinking offering a bailout for Greece when we can't even manage our own affairs?

And WTF is wrong with the Government Motors CEO who wants to add a dollar a gallon tax on gasoline to force people into more fuel efficient cars?  I'm going to drive my V-8 Crown Vic until the damn wheels fall off.

And as God as my witness, I'm stocking up on incandescent light bulbs as fast as I can.  Damn nanny state Democrats trying to tell me what kind of light bulb to use.  Instead of my incandescent bulb, you want me to use a squirrely bulb that puts out weak light and requires three pages of EPA instructions on what to do if you break one in your house?   And yes, I know GWB signed this stupid law but it was still stupid.  Still is stupid.  I bought a case of light bulbs today.

Meanwhile, we still have to put up with Obama's hypocrisy and arrogance, his constant blaming Bush for things unless it's something that suits him.  Victor Davis Hanson sums up the current state of affairs:

The stock market is sliding. Gas and food prices are soaring. The housing market is as bad as it has been for the last three years. Unemployment is back over 9 percent. Economic growth is anemic. The national debt has risen $5 trillion in just three years. This year’s $1.6 trillion budget deficit is not stimulating anything but uncertainty and despair. Medicare and Social Security are not sustainable at present rates of payouts. Record numbers of Americans draw food stamps and unemployment insurance. An unpopular Obamacare has not even been implemented yet, and the administration has already granted 1,400 exemptions from it. 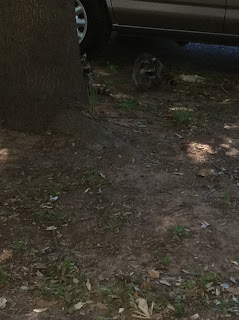 On another note, the raccoons in the neighborhood are multiplying!  Two babies crawling around The Teenager's car today (notice: the car is parked on the street because he can't see to get out of the driveway safely).  The babies made me nervous crawling up into the undercarriage of his car, but they came out, got pretty close to me, then scurried across the street.

It's five o'clock somewhere.  I think I need to go have a beer and chill out.
Posted by Pat Austin Becker at 2:07 PM

Geez! Such a crybaby! Why can't you be more like Rep. Weiner?

Plan #1. Go to the auto parts store. Buy a couple of packs of "fusees", those red stick things they use at accidents scenes as flares, learn how to light them, and then toss two or three lighted ones out in the street just before you back out. As a warning to through traffic. Then if they hit you its their fault. Once on the street, park for a moment and stub out the unburned remnants. Reuse them next time by re-lighting them from a new one.

Plan #2. Drive onto your neighbors lawn far enough to turn around so you can nose out into the street the next time you leave. Make sure your four-way flashers are on as you come out. That way it's the other cars' fault - again.

Plan #3. Light a fusee and stick in into the pile of dried branches and stacked logs. Do it at night so you can enjoy the bonfire. Don't park your car next to the curb that night. Have donuts or cookies available for the firefighters when they arrive. They appreciate thoughtful gestures like that.

Just what I said to my evidence tech around four pm when I was getting a breath sample from a DWI doctor...I enjoyed it ;<)

(lol) I came across your post through a search on O's czar Jennings. I think I'm grinding my teeth again and notice I wake up with anxiety more than ever. We're in for a rocky ride for sure!
Well I hope those tree limbs are taken care of and your have a restful vacation.
Regards, Regina

Right on, Ms. Pat, Excellent views and comments...I agree with you fully....You truly need your own T.V. show. I love and APPRECIATE your Blog, and I love you withall of my heart. Sincerely, Rev. Milly Rose Frizzelle, & Rev. David Frizzelle.