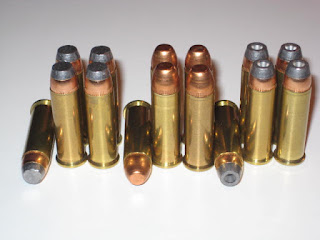 Gun makers, that is:

Gun manufacturing is the one private-sector industry “doing fine” on Mr. Obama’s watch. Sturm, Ruger & Co. sold 1 million firearms in the first quarter of 2012 - an amazing 50 percent increase from the first quarter of 2011. The jump was so steep that the company stopped accepting orders from March to May to catch up with demand for its products.

Last month, Smith & Wesson announced a firearm-order backlog of approximately $439 million by the end of April, up 135 percent from the same quarter in 2011. Sales in that period were up 28 percent from 2011 and 14 percent over its own predictions to investors. NSSF estimates the industry is responsible for approximately 180,000 jobs and has an annual impact on the U.S. economy of $28 billion.

While Time attributes the boon partially to zombies (no, really), it is also noted that it could have something to do with the upcoming election:

The St. Louis Post-Dispatch reports that Olin’s ammunition sales have risen strongly during the first quarter of 2012, increasing 8% overall and 13% among civilians. During an April conference call with analysts, Olin’s CEO said the increase in sales “may be related to the election.”


What do you think?  Are you stocking up on ammo?

At least some portion of the economy is booming.
Posted by Pat Austin Becker at 3:43 PM

So, what's going on here? Are people afraid that if Obama is reelected he will do everything in his power to implement stricter gun control laws? Are people fearing that the national/world economy is going to collapse soon, regardless of who our next president will be? What gives?

I think it says more about the economy, and I think the point it makes about the economy is entirely valid. Doesn't matter which side wins; neither side has a clue, and social order is breaking down world wide. Too many people, too few resources.