Romney has raised a lot of cash today.  I just made a donation.  You can too.

As of right now, the Romney campaign has raised over $1.5 million today:

Reaction to the Supreme Court opinion from around the web:

I linked to this yesterday but I want to be sure you see it.  The Supreme Court decided that ObamaCare is a "tax."  In fact, it's at least twenty new taxes. 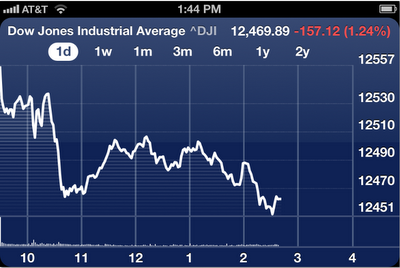 
I do expect a lot of re-energization among Tea Party folks who had perhaps grown a bit complacent.


Via The Foundry, the Senate may consider repeal through reconciliation:

Now that the individual mandate has acquired the official constitutional status of a “tax”, there is no longer any doubt that the Congress, and more specifically the Senate, can repeal it pursuant to the simple majority vote threshold available under the Budget Act’s reconciliation process. Some Senate insiders were concerned that the reconciliation process would leave too much of Obamacare intact, including the individual mandate. But today’s decision, while alarming in so many other ways, dispels with that concern.

The mandate is now a revenue provision. Therefore, it is germane and not subject to a Senate parliamentary point of order to strike it from a repeal bill. The Senate’s filibuster process that would require a supermajority of 60 Senate votes to approve repeal is now irrelevant.

The thread at Memeorandum grows.


I'm not surprised by today's ruling. I noted previously (somewhere around here) that the Court's decision on Arizona's SB 1070 was a warning against premature football-spiking. Chief Justice John Roberts, I suspect, is being extremely careful about preserving the institutional legitimacy of the Court --- and by extension, the legacy of "the natural court" under his leadership.

The fight over ObamaCare has never been just about what’s allowed under the Constitution or some spurious notion of a “right” to health care. At the core is a conflict of visions over the nature of government and the relation of citizens to that government: Is it a federal government of limited, specific powers and a freeborn citizenry with inherent rights that cannot be revoked, or is it a paternalistic State of unlimited power, with citizens reduced to wards?
In the end, ObamaCare is a political question of the purest, most basic kind: What is the nature of our polity?
Doug Powers:


Though Obama and the Democrats have won the day, given the lack of popularity of the health care law (two thirds of Americans wanted the Supreme Court to overturn at least some part of the law), in just a few months they may very well look back and view this time as the moment that was the last straw for voters and the end of the president’s re-election hopes. We’ll see.


And be sure to read the reaction at NRO:


The Court has failed to do its duty. Conservatives should not follow its example — which is what they would do if they now gave up the fight against Obamacare. The law, as rewritten by judges, remains incompatible with the country’s tradition of limited government, the future strength of our health-care system, and the nation’s solvency. We are not among those who are convinced that we will be stuck with it forever if the next election goes wrong: The law is also so poorly structured that we think it may well unravel even if put fully into effect.

Check out the 2012 Senate races.  We need to take the Senate.

This morning was quite a burn but my fire burns hotter and longer.

I just donated too::Hoping that Mitt can turn this around for real::.

It becomes important that we libertarians fight the charge of hypocrisy. Let us be clear, as Ayn Rand teaches, that religion in general, and Christianity is particular, is for weaklings. We are here for ourselves. Long live greed and self-centeredness. It is only my well-being that I care about. Long live ME.

I live in the UK, am poor and I have cancer. I expect that if I lived in the US I would be facing the possibility of not being able to have life saving treatment and dying by the ripe old age of 55.
I understand that you insured people don't want to pay for anyone else's health care, but what I don't understand is why so many people in the US who have these views call themselves Christians! You conservatives are so harsh in your attitude to the have nots.

I wonder if joseph is aware that the attitude to life he espouses, via Rand, is to the tee what Satanists also believe.