Rep. King Promises a Lawsuit While Romney Takes a Knee 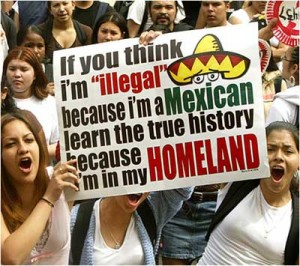 There's a poll out today from Bloomberg reporting that 64% of likely voters approve of Obama's decision to stop enforcing immigration laws:

Sixty-four percent of likely voters surveyed after Obama’s June 15 announcement said they agreed with the policy, while 30 percent said they disagreed. Independents backed the decision by better than a two-to-one margin.

That said, Ed Morrissey at Hot Air took a look at the Bloomberg polling data and has a few questions about the results.  He notes the absence of any demographic data as well as the absence of any party affiliation, so it's difficult to weigh the bias of the poll.  As to whether or not Obama "is winning" the immigration discussion, Morrissey also questions that:


Furthermore, we have other consistent data to check.  For instance, Gallup’s tracking polls would have already shown a significant bump in the rolling averages if this issue really moves the needle as Team Obama hopes.  As of this morning, Obama’s approval in the three-day cycle that included Friday and the two days following the announcement sits at 46/47.  The addition of Sunday’s data added a point to his approval and deducted two from his disapproval, which means Obama got some small bump over the weekend … but hardly a game-changer.  The seven-day rolling average on the head-to-head race went from Romney up over Obama 46/45 to a 46/46 tie.

And if you go by Rasmussen, according to Morrissey, "there's even less impact."

So did this dictatorial fiat help Obama?  Probably not, in the end.

Rep. Steve King was on Fox News this morning discussing his intent to sue Obama over the immigration mandate.  King insists this is an over reach and a rule "by edict."  He expressed even more Constitutional outrage in pointing out that "we take an oath to uphold the Constitution, too.  Our Founding Fathers envisioned that each branch of government would jealously protect the authority granted to it in the Constitution."  He called this a "vast and insulting" over reach.

King is suing on the separation of powers issue;  he also points to Article 2 that the laws of this nation be "faithfully executed" not created by the president.  Watch the whole thing:

The point is clear that this edict, or "mandate by press conference" that Obama has thrown down is a political move.  It's another pandering move by a politician who doesn't have a record to campaign on.  It's a continuation of his intent to separate and divide us all and initiate class warfare among Americans.  It's all he knows how to do.

Obama issued this edict intentionally before Sen. Marco Rubio could introduce his version of the DREAM Act which, according to Daniel Foster, has a passing chance at legitimate, bipartisan, lawful immigration reform:

It’s simple. On Friday, retiring Sen. Jon Kyl (R., Ariz.) told National Review editors that he expected the version of DREAM he cosponsored with Marco Rubio (R., Fla.) to be greeted with “tolerance by our most conservative friends, and enthusiasm from the rest.”

Of course he said this even as the Obama administration was Friday-dumping the DHS memo on the public. Forty-eight hours later it was clear any momentum a Republican-friendly version of DREAM had was dead. As Rubio put it: “People are going to say to me, ‘Why are we going to need to do anything on this now. It has been dealt with. We can wait until after the election. . . . And it is going to be hard to argue against that.”

This is a dangerous precedent that Obama has initiated and it must be struck down.  Lawful reform must prevail.


Romney's response to the whole mess was dispiriting.  Milquetoast.  Weak.  John O'Sullivan has what Romney said when asked if he would overturn this edict and what he SHOULD have said:


Interviewer: But would you repeal it?

Romney: I hope that when I am inaugurated, this illegality will already have been withdrawn or ruled unconstitutional. It is not too late for the president to have wiser second thoughts. But if it is still standing, then of course I will withdraw it and ask Congress to consider a wider and more thoughtful review of immigration law — one that strengthens our borders and ensures that immigration and citizenship are determined by the American people and their elected representatives. You cannot have our immigration laws determined by some people who smuggle people into America and others who manage to evade the police once here. You cannot have U.S. citizenship granted to people who break into our country and manage to have a child before they are caught. You cannot have two presidents in succession breaking their vow to uphold the Constitution. The people must be able to trust those they elect.

Romney should take a lesson from O'Sullivan and from Rep. King.  The weak-kneed response he gave just reinforces the concerns that conservatives had about him in the first place.

Charles Krauthammer says Romney's deference is the correct move and he makes a valid point; Krauthammer says that any day Romney is not talking about the economy is a day that Obama wins.  I think the two issues are linked and Romney should make that clear.  With up to 800,000 new work permits on the line, that must certainly figure into American unemployment numbers.

Krauthammer suggests it is Congress who should be outraged and offended as Obama has usurped their power.  Unless we have a cadre of fighters like Rep. Steve King in Congress, I'm not expecting much from them.


(More at Memeorandum)
Posted by Pat Austin Becker at 12:23 PM

It's utterly irrelevant what the polling data is on this question. Elected officials voted on it multiple times over the years without even pulling any fancy parliamentary stunts at all. If there has been any change in voters attitudes on it, hopefully Congress- our elected legislative branch empowered by our governing documents with the ability to pass laws- will make the appropriate decisions and pass the correct legislation through the proper and legal processes.

Lawless tyrants can be very popular- history has demonstrated this many times- but in the end, they are lawless and tyrants and should be opposed with all possible passion by liberty-loving free citizens.