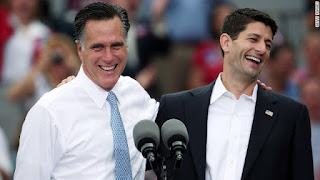 I'll be live-blogging the results tonight; it'll be more of an open-thread sort of affair.

I've purposely avoided projections, predictions, and much poll analysis.  There's enough of that to go around and certainly by many more expert than this little blogger.

Allahpundit has a great post on electoral math you should read before the night gets started.  The bottom line:

If all of the above is too complicated, here’s a much simpler way to understand Romney’s task. Assuming Obama wins Nevada, all he has to do to win the election is take the big four in the Rust Belt and midwest — i.e., Ohio, Wisconsin, Michigan, and Pennsylvania. That would put him at 271. Romney must win at least one of those four states to have any chance of victory. If he doesn’t, then he’d have to win every other battleground state — Nevada included — or else.


So.  Catch your breath and check back in a bit. 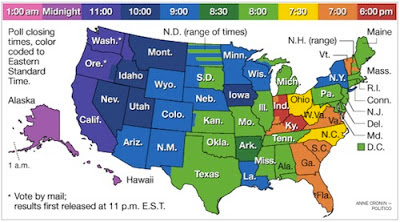 Update 2:  Drudge is trolling.  Do not be alarmed. 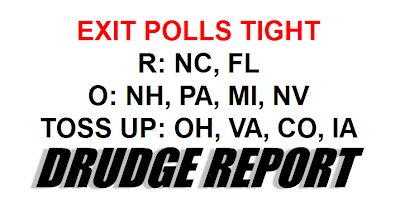 6:10 (CST):  Indiana flips for Romney, it seems.  Fox is calling to for Romney.  Virginia is still to close.  Kentucky is also in the Romney column.   No real surprises yet.  Mr. SIGIS and I both are on pins and needles.

At any rate, right now FOX has the electoral count at 24 to 3 for Romney.  Romney has picked up West Virginia.  Still waiting on Virginia and Ohio - the big ones.

Reports on Twitter are that lines in Florida are still extremely long.  It's going to be a long night.

6:50:  I'm hearing on Twitter that many in Virginia are still in line and that they are delaying calling the state until the top of the hour for that reason.

I'm watching Fox who reports that 51% of those polled trust Obama over Romney on handling an international crisis.  WTH?  Because he did such a good job with Libya?  #fourdeadAmericans.

7:00:  I'm getting tired of the "too close to call" phrase.  I'm stressing out on Florida right now which I was pretty sure would go to Romney but is still very close.

Romney gets Alabama, Oklahoma, and Mississippi. 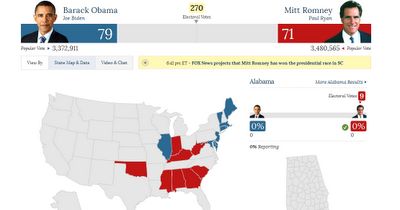 Meanwhile, Bill O'Reilly is spreading doom and gloom saying Bomber-Jacket-Obama won points for loping around with Chris Christie on Hurricane Sandy relief.  He would have us believe that the American public is so gullible they forgot all about Libya and four dead Americans because Obama made pretty pictures in the media acting concerned in New Jersey.

For the record, I disagree with everything O'Reilly just said.  Get the hook.

Virginia is still on hold because they still have long lines in both Democrat and Republican areas.  Rove thinks this is a good sign for Romney based on the counties he's looking at.

I'm still nervous about Florida.  Very close.  And it looks like Connie Mack lost there.  Not a good sign. 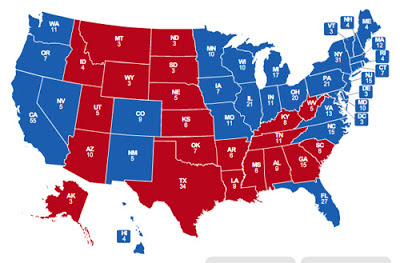 Still waiting on those all important swing states right now.

Fox is calling Arkansas for Romney (+6 votes).  Current electoral count is now Romney 88, Obama 79.  No surprises yet.  Nerves on edge.

7:45:   PA Senate goes to Bob Casey (D) over Tom Smith (R).  No Senate takeover for Republicans it seems.  The path to repeal ObamaCare just got a lot more difficult. 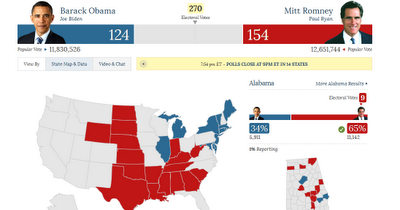 8:05:   It seems that Elizabeth Warren will win in Mass.  That's just astounding.

I'm watching the FL returns on the Secretary of State page and it's literally back and forth.

8:15:  Damn.  Obama gets Pennsylvania.   How in the world could a coal state vote for a President with such a profound war on coal?

Then there is THIS:

Liz Cheney:  "It feels like deja vu in so many ways."  No kidding.  She's still holding out hope for Romney.

The electoral map is currently tied at 153.

And the first take-back of the night:  Elizabeth Warren may not have won her race just yet.

Florida is still literally flipping back and forth.  It should not be this close.

Reports are that Romney is leading in Virginia.  #holdingmybreath

8:50:   I'm afraid that everyone in Florida who voted for Gary Johnson, knowing he couldn't win, gave this election to Obama.  It's come to this.

Meanwhile, in Virginia, Romney is still looking good, and he is looking steady in Ohio.

And yes, Elizabeth Warren wins the Mass. Senate race after all.  Bah.

The next batch of state closings are coming up which I am now anticipating with dread.

Obama is leading Iowa but too soon to call.  He's also leading Nevada, but still too soon.

Brit Hume:  We are a center-right country.  Of the moderates, a lot of them "are actually liberals."

Looking at the Sec. of State page, Florida is looking like Obama.

Fox calls Missouri Senate for Claire McCaskill - 55% to 39%.  Akin blew that one.

Palin is on Fox:  "This is a catastrophic setback for our economy," and cites sequestration, Supreme Court justices that will be appointed, and the debt.

9:15:   Obama gets New Mexico (+5).  Electoral count is tied at 163.  Rove is still positive for Ohio.  Megyn Kelly asked Rove if he's "feeling pessimistic" and Rove spews numbers and statistics, refusing to admit the horror of the electoral map.

Romney has to win Virginia, Florida, and one other state, says Rove, IF Romney wins Ohio.  Meanwhile, Florida voters for Johnson have given America over to Obama.

Peggy Noonan:  "There is a subdued feeling to this if you are a Republican or a Conservative this evening."  Understatement of the night.  "Subdued" isn't exactly what I'm feeling.

After all this money and all this time we end up right where we were with no change at all.

All this and Robert Gibbs, too?  I don't think I can stand it.

Many on Twitter are questioning the early Wisconsin call.  Romney is still leading there.  Will that one come back?

We are waiting on Virginia and Florida.  The panhandle is still not in and it usually goes Republican. 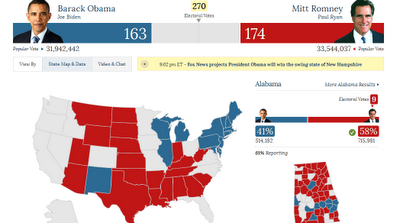 They are using the "R" word for Florida.  They have an automatic recount rule there if the vote is within a certain range.

9:55:  And it gets better.  Susan Estrich is on.  They haven't pulled her out since the last election.  Any minute now they'll make us listen to Obama.  I'm pulling the plug then.

Looks like Romney is going to get North Carolina but they haven't called it yet.    Florida is still looking like Obama.  90% of the votes are in and he leads by 36,000.

Fox now calling North Carolina for Romney (+15).  Fox calls Idaho for Romney, too.  Obama gets the state of Washington and Hawaii.  And BREAKING NEWS:  California to Obama.


The mainstream press once again bought Obama the election. Which will buy him 4 years of an imperial presidency with nothing to stop him.
End of country.
Time to maybe start a new one, I think.  Because I’ll be goddamned if my family is going to work to pay for other people’s shit; and I most certainly won’t live in a post-Constitutional police state — at least, not without putting up whatever resistance I can.

As Bride of Rove said in the comments, "Who is John Galt?"

READER ZACH WHITE EMAILS: “If Obama is reelected, good hardworking people should give up and go Galt. The tipping point is the 2012 election. Will the makers finally succumb to the takers? It’s pointless to think that if America reelects the most unqualified disastrous president in recent memory, we should stand our ground and continue fighting. it’s a signal that marxist free-lunchism and free birth control for everyone trump economic well-being and prosperity in the minds of the masses. Give up. Go Galt. Protect what few assets you have left, and start to hunker down for the coming storm.

And we are done.

Florida is now moot.  As is Virginia.

And so we are done and America as we know it is done.  Make no mistake about that.  Those of us that work and have jobs will now be working to support 50% of the country who does not work and will never be compelled to work.  Free phones, food stamps, and single pay health care will now be the order of the day.  Generational debt, economic stagnation, and a total lapse in national security.

Iran and al Qaeda must certainly be celebrating tonight.

I'm truly scared for my country, my family, and the future.

This blog is going dark for a while.

It is over.
Posted by Pat Austin Becker at 4:51 PM

We are completely screwed at this point. There I said it at 10:12 pm. Elizabeth Warren? The soul of this nation is dead. This election is the last throws of the brain shutting down. I don't think I can watch the news or read a news paper after this. I just can't.

Sarah Palin is calling it a day on Fox. Ohio and Florida are swinging to Obama.

We are done. We are all socialists now.

There's no point in posting anymore. We';re all basically talking to ourselves in our own conservative echo chamber. None of these posts we've been doing since 2008 has changed a thing. Not really.
America gets what it votes for. The rest of us are remanded to dodging the riffraff and boning up on our Constitutional knowledge and remaining active at state and local levels. I still say we need real voter id laws.

Who is John Galt?

You're right on all accounts, Red.

Amen to that. Building a bunker.

What Bride of Rove said.