Enemy of the Country 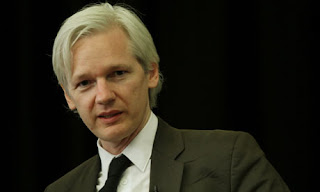 All I can say about the WikiLeaks document drop is where is Julian Assange getting this information?

This just enrages me that this Julian Assange has not been captured, extradited to the United States and prosecuted, but maybe things don't work like that.  It's horrendous enough that he's publishing these documents, but I want to know where he's getting them.

Have we lost our minds?  Wikileaks is about hurting us, bringing us down, damaging our relations with others, rendering us impotent.  This is not about open government policy, as if Wikileaks went a bit too far on its class project.

Julian Assange should have been indicted by now, and if the law did not allow more punitive measures in this circumstance, then the law should have been changed after the first document dump.  Assange is an enemy of our country and should be treated as such.

And as far as I'm concerned, the New York Times, is absolutely contemptible for publishing them.  Oh, I know that the foreign papers would publish them anyway, but ...If I'm in charge of the NYT?  Would. Not.Get.Published.


Do the diplomatic cables "relate to the national defense"? Some of them certainly seem to. So a criminal prosecution of those involved in the leaks who are within federal jurisdiction (e.g., the New York Times) may be possible. Scott has studied these issues more closely than I have and may have more to say on the subject.  The Times explained its rationale for publishing the leaked cables here. The paper's most persuasive argument is that a number of foreign newspapers also have the documents and are sure to publish them, so the Times might as well join in.

(Insert unprintable expletive here).   As far as I'm concerned, this is an act of war. Prosecute Assange.  Find out the source of the documents leak and prosecute.  End this.

(More at Memeorandum)
Posted by Pat Austin Becker at 5:20 AM

Uh, is this guy aware that the CIA is in the business of KILLING foriegners who threaten our national security?

I think Obie and his minions have defanged the CIA. The ones to get the job done are called Special Ops...imagine Le Monde with the headline "US Spec Ops Disappear Wikileaks Hero in Paris" LOL!

The CIA and the Castro-ite Cubans took care of JFK in 63...and the intelligence leadership nowadays is populated by similar souls. The Left is not only in the White House. Assange is probably on their payroll too.

I spent 23 years in Army intelligence and when I started it was all books and memo’s. Now you have classified versions of the Internet (SIPRNET and other classified networks…just like the internet but with classifications marking on them).

The fact many sources (CIA, Defense Intelligence Agency, etc) are on the network is a blessing if you are doing legitimate intelligence work as well as simple daily operations (seeing current events on the battlefield, etc). But like all technology it’s a two edged sword.

I personally hope they go after this private for Treason, as I think this qualifies

Now there is one question not answered or even asked...who is funding Wikileaks? I went on the site this morning and there is a link to donate and the usual propaganda on "who are we", but after the last few months I know this sack of a%^& has got to using security and hold up in secure housing..that cost money. Probably a "shovel ready" job funded by Obama Stimulus. But I doubt if ABC/CBS/NBC/PBS/CNN/MSNBC/ will even ask the question.

Assange needs to be tapped in the head and dissappeared, and the scum PFC needs to be tried for treason and hung...post haste and publically.

As for Assange, if the CIA isn't willing to do the job, I'm sure the Mossad can handle it, would love to in fact, as I'm sure Assange wouldn't hesitate to publish Israel's secrets faster than you can say Moses.

This is truly dangerous stuff, not for the information released per se, but for the insights provided to malevolent people about how our government operates, does business, collects information: our processes that create our product.

But does he have the cojones?

I'm right there with you. Why is God's name is he still a free man?