Did Rubio and Haley "Out Jindal-Jindal"? 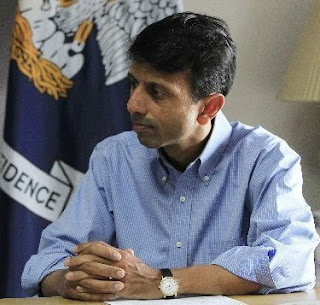 ...I have a cold and and I'm stuffy, sleepy and cranky.  I find it better not to blog in such cases or else I say things I'm sorry for later.

I'm off to work extra early this morning as I have an ever growing stack of reports and documentation due and need to get it done before Monday morning.  I was up at midnight working on them because it was all swirling in my head and I couldn't sleep.  I had a to-do list of some 28 things.  Oh and there are classes to teach, too.

We're still planning on doing the Highland Jazz and Blues Festival tomorrow; the weather calls for some rain in the morning but then it's moving on out.  It should be fine for festival time but maybe a little damp at first!

A couple of good posts this morning via The Dead Pelican which I wish I could go in to in more detail.  Speculation is that Bobby Jindal has peaked and is fading, especially now with the "arrival" of Marco Rubio.  Many in Louisiana have complained long and hard about Jindal's frequent jaunts around the country to attend fundraisers for Republican candidates rather than stay in Louisiana and take care of the state.  Now he's out and about promoting his book.

This is, of course, not exactly as defensible as fundraising for the party and has raised hackles among some.  Read Stephanie Grace in NOLA and The Hayride on the book tour.  There's some wiggle room in both cases.  But did Rubio "out Jindal-Jindal"?  The case seems to be that between Nikki Haley and Marco Rubio, Jindal's "brand" isn't as marketable as it was.  He missed his window.

Now I don't know about all that.  As I said, there's some wiggle room there.  I'd be looking more to policy than ethnicity, actually.  But I see the point.

At any rate, check those out and leave your thoughts.

Eh, "peaking brands" are only a problem for those who lack the staying power to be statesmen. And we shouldn't be electing them to higher office anyway.

I think Jindal is cut from a different mold, and these trips are less about promoting himself and more about bolstering support for other principled leaders. He's as great a role model for real political reform in his way as Sarah Palin is in hers.

Hope you get to feeling better quickly!

Everybody should see this... thus duly linked:

You're only down on him because we're in a bad mood when we have a cold. Like Tina said, I beleive he's cut from a different mold and is doing what he does to promote conservative values.