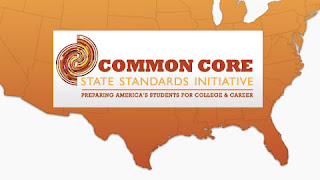 The list of states opposed to Common Core is growing.  Alabama joins South Carolina, Utah, and Colorado in having second thoughts:

Last week, the state senate adopted a resolution to “encourage the State Board of Education to take all steps it deems appropriate, including revocation of the adoption of the initiative’s standards if necessary, to retain complete control over Alabama’s academic standards, curriculum, instruction, and testing system.”

I'm still researching and reading up on the issue from both sides.  I posted some preliminary information and thoughts here.  Since then I have received several emails from educators across the nation on both sides of Common Core.

Christel Swasy, an educator and blogger in Utah, sent me a couple of detailed emails about why Common Core is wrong for Utah.  Her blog is here and you can read a lot about CCSS there.

What most concerns me right now is the over reach of the federal government into the education curriculum.  The comeback is that "CCSS is voluntary!  The feds didn't force this upon the states!"  But the states were certainly coerced into adopting the standards; no adoption, no Race to the Top grant money and no chance for waivers of NCLB.  That's some pretty serious arm twisting.  And I don't agree with that part of it.

If CCSS is so great, why the coercion?

As for the standards themselves, I'm comparing them closely with the standards currently in place in Louisiana.  For my part they just don't seem as good.  Also disturbing is the movement away from classical texts and literature in general to non-fiction and technical writing.  Now, we do a pretty good bit of non-fiction in my classes.  To a certain extent teachers can pick and choose the selections from the text.  You don't necessarily have to real ALL the fiction, or ALL the non-fiction, for example.  You follow your pacing guide, hit all your standards and benchmarks, and select a fair representation from each genre (in 10th grade, anyway).

I've always encouraged my kids to the non-fiction and they do enjoy it:  they love reading about the Holocaust (we read Night, by Weisel) and are shocked at what they learn in that unit.  We have in the past read from Into Thin Air, RMS Titanic, and we've read about the Montgomery bus boycott.

So, it's not the non-fiction that concerns me but maybe the predominance of it.

I'm concerned that CCSS is just another pedagogical fad (and an expensive one, at that) that educators have seen come and go for years.

I'll post my comparison and findings soon, but in the meantime, I encourage you to educate yourself about Common Core because unless you live in Texas, Alaska, Virginia, or Nebraska, it's in your state.

If O has anything to do with it, I would definitely have second thoughts.

Be concerned, be very concerned. Just remember lowering the standards.
We in Mass had higher standards than required by fed, did not want to switch but politicians choose to.