Smartest President Ever is Now an Expert on Judaism 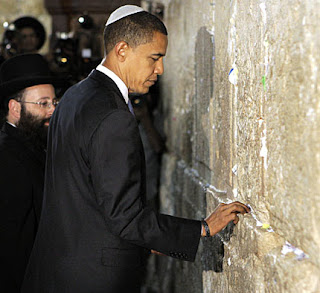 Obama also stressed he probably knows about Judaism more than any other president, because he read about it - and wondered how come no one asks Speaker of the House of Representatives John Boehner or Senate minority leader Mitch McConnel about their support to Israel.


That's absolutely amazing.  The arrogance of that statement leaves me speechless.

I've read a lot about the history of pressed glass and about depression glass.  Does that mean I know more than Milly Rose about it?  Not hardly.

And how does Obama know what every other president has read or what they knew?  Oh wait, probably because he's read about them.

And the claim that Obama knows more about Judaism than any president? His vanity boggles the mind. One could begin by citing Adams and Madison, who knew Hebrew, or Harry Truman, who knew Jewish history ... but it's silly to dignify this claim with a rebuttal. In thinking about the presidents since Truman, though, I'd guess the president who knew the most about Judaism was Jimmy Carter, who taught Sunday school and had a deep interest in religion. So let's stipulate that of the modern presidents, Carter and Obama "know" the most about Judaism. But what is it they know? In Obama's case, one could ask whether what he “knows” is what he learned from Rashid Khalidi and Jeremiah Wright.


I would add Thomas Jefferson to Kristol's list.  He knew a thing or two about Judaism and religious freedom.  He was certainly well read.

Narcissistic personality disorder is a mental disorder in which people have an inflated sense of their own importance and a deep need for admiration. Those with narcissistic personality disorder believe that they're superior to others and have little regard for other people's feelings. But behind this mask of ultra-confidence lies a fragile self-esteem, vulnerable to the slightest criticism.

Since Judaism stopped seeking converts some 1500 years ago, the non-Jewish world has been laughably ignorant of our beliefs. If Obama knows just a little bit, he is way ahead of just about everybody else.

Obama may be smart, He is just not smart in the right places!