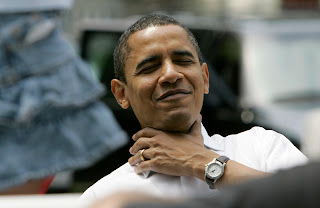 At an appearance in Arnold, MO yesterday, Mr. Obama skewed a few of his facts, according to the AP:

OBAMA: "Number one, we inherited a $1.3 trillion deficit.... That wasn't me. Number two, there is almost uniform consensus among economists that in the middle of the biggest crisis, financial crisis, since the Great Depression, we had to take extraordinary steps. So you've got a lot of Republican economists who agree that we had to do a stimulus package and we had to do something about the banks. Those are one-time charges, and they're big, and they'll make our deficits go up over the next two years." — in Missouri.

Congress controls the purse strings, not the president, and it was under Democratic control for Obama's last two years as Illinois senator. Obama supported the emergency bailout package in President George W. Bush's final months — a package Democratic leaders wanted to make bigger.

To be sure, Obama opposed the Iraq war, a drain on federal coffers for six years before he became president. But with one major exception, he voted in support of Iraq war spending.

The economy has worsened under Obama, though from forces surely in play before he became president, and he can credibly claim to have inherited a grim situation.

Still, his response to the crisis goes well beyond "one-time charges."

He's persuaded Congress to expand children's health insurance, education spending, health information technology and more. He's moving ahead on a variety of big-ticket items on health care, the environment, energy and transportation that, if achieved, will be more enduring than bank bailouts and aid for homeowners.

The nonpartisan Committee for a Responsible Federal Budget estimated his policy proposals would add a net $428 billion to the deficit over four years, even accounting for his spending reduction goals. Now, the deficit is nearly quadrupling to $1.75 trillion.

There is more here.

Maybe if he'd get his facts straight and get a real grasp of how his massive spending plans are screwing up the economy he might understand what the tea parties are about, since he also seems to have a failure to grasp the idea behind those as well.

Posted by Pat Austin Becker at 5:16 AM

So let me get this straight. It was Congress' fault when Bush was POTUS, and now it's the White House fault, now that Obama is POTUS. You are certainly a twisted wing nut for sure.A short sighted, narrow minded ideologue. It's dipshits like you that are screwing this country, with your worship of right wing plutocrats and neoliberal / fascist policy. Why do you worship crypto fascist right wingery? What is your problem? Seriously what damage has been done to your brain?

So let me get this straight, monetary problems were the fault of congress when Bush was POTUS and now the fault of the White House now that Obama is POTUS. What kind of a half whit crypto fascist wing nut are you? Why do you worship plutocratic neoconservative fascism? What the hell is your problem? What is wrong with you?