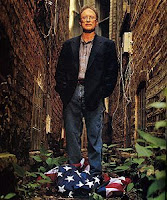 First there was Canada, then Boston College, and now Naperville.

It's rough being Bill Ayers. The life of an old terrorist is not all it's cracked up to be. Just last week Ayers was uninvited to speak at Boston College and now Napervillie North High School has rescinded its invitation after a flurry of protests and hostile e-mails from parents and residents.

The Naperville Sun reports that "Superintendent Dr. Alan Leis released a statement Monday that noted the district’s original reaction was a possible change in venues, saying 'over the weekend, however, it became clear that this issue was not really about where Dr. Ayers was speaking, but that he was speaking at all.'"

Ayers was also scheduled to speak at a local bookshop and that visit has also been canceled; Boston College has also said that Ayers will not only be not visiting the campus but he will not be speaking via videoconference either.

What's a terrorist to do? This certain opens up his social calendar, and the graduation season is near. Maybe Notre Dame will have an opening?
Posted by Pat Austin Becker at 5:06 PM