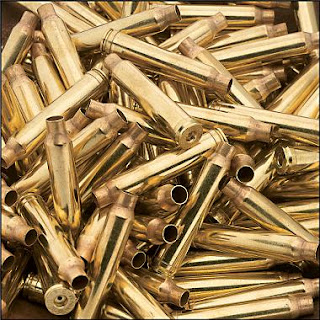 This from Gordon Hutchinson, author of The Great New Orleans Gun Grab:

"From now on, remanufacturers of military brass will not be able to buy surplus brass from DOD--actually from Government Liquidators, llc.--the corporation that sells surplus materials for the U.S. government. At least, not in any form recognizable as once-fired brass ammunition. Now all brass ammunition will have to be shredded, and sold as scrap."

Now, to be clear, I'm not a gun enthusiast in that I don't participate in the sport of shooting. I don't own a gun, as I've said. But that doesn't mean I don't believe in the Second Amendment or the right of people to own guns if they want to.

"You can expect this to affect every bullet you purchase in the future--with no reloaded ammunition available, the already strained new manufacturers will be unable to meet demand. They are already turning out everything they can build for the military market. The civilian market is stressed to the point even reloading components have become hard to find.

Now, with this hit, ammunition prices will go through the roof in the next year."

Even if you don't own guns or participate in the sport of target shooting this will affect you because it also affects law enforcement. Who pays for the ammo for law enforcement? Taxpayers, maybe? With this market gone, some smaller law enforcement agencies and individual officers will no longer be able to purchase inexpensive reloaded ammunition for practice. Companies such as Georgia Arms, which Mr. Hutchinson writes about, will go out of business.

Not such good news in this economy. Why would the Obama administration take such action as to put more small businesses out of work in this economy? So they can control guns. One of his agenda items.

In addition to putting people out of work, the cost to the taxpayers is compounded by the fact that it reduces the return by 80% on the sale of expended brass. Now the material will be sold as scrap and sold to China at a much lower return.

The nanny-state business of it is disturbing as well, as the letter received by Larry Haynie of Georgia Arms from the DOD suggests that in addition to being unable to sell him anymore brass, they must also come to his place of business and witness the destruction of his already purchased brass: "The new DRMS requirement calls for DOD Surplus personnel to witness the mutilation of the property and sign the Certificate of Destruction. Mutilation of the property can be done at the DRMO, if permitted by the Government, or it may be mutilated at a site chosen by the buyer."

If you visit Mr. Hutchinson's site, linked above, he has written a letter which you can copy and send to your legislators.

Update: Via Instapundit, here is a post about ammunition shortages in Florida.

Update 2: Jonah Goldberg at NRO has picked up the story.

Insanity, pure insanity. But that's the left for you.

I like to hunt and shoot targets so I do my own reloading. The only time I ever shot at anyone was in Vietnam, and when I think about that it makes me sad, and because of that I would never hurt someone who wasn't trying to hurt me or my family or friends.
The gun control people and the government is scared of people like me. I can hunt for what I eat, and I can protect myself. I don't need the government to take care of me.
If someone don't like guns and are scared of them don't get one. But leave me alone.