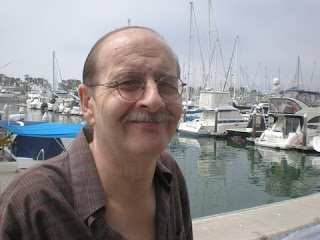 It is with heavy heart tonight that I post the sad passing of one of our fellow conservative bloggers, the infamous Snaggletoothie.

I received an email from Chris's father this evening telling me of his son's death.  Chris suffered a seizure Monday, fell and hit his head, and by the end of the week he was in a coma.  He died Friday afternoon.

When I started this blog in August 2008, snaggletoothie, Chris, was one of my earliest readers and frequent commenters.  Chris was one of my staunchest defenders when I was attacked by hostile commenters; I could always count on him to leave something in my defense!

On his own blog, Snaggletoothie of the Loyal Opposition, Chris posted on everything from politics to literature, fine music and the infamous fabulous car at the bottom of the page.  Chris had always posted "the beautiful woman at the end of the page" and one day he put a car up there.  Some classic, beautiful 1960s machine.  I told him he ought to quit with the women and put those cars up there!   He did.  Well, sort of...he kept the women, but he kept the cars too!

Schizo-affective. Yes, I think that’s the diagnosis that most accurately captures Jared Loughner. This best describes Loughner weird amalgam of delusions, social isolation, long hours without sleep, and seeming congenital inability to connect to his fellows. Drugs were also a major exacerbating factor. But I have to figure that Obama and the rabid left welcomes whatever flowed from the drugs since they are so adamant about keeping the southern border wide open.

I am in the midst of writing a song about the shooting. It will be sung to the tune of “The Horst Wessel Song.”

Chris also had a lovely blog devoted to literature called The Chinese Jar.

Chris's last post on the 22nd was Ravel.  Here's to you, Chris.  We will miss you, your wit, and your wisdom.


His dad requests that any memorial or donations be made to the charity of your choice in Chris Monson's name.  Or just snaggletoothie.

His dad's blog is here and his post on Chris is here, should you like to leave a message.

Prayers to the family.

Update:  Sorry.  My erroneous headline has been fixed.
Posted by Pat Austin Becker at 10:57 PM

I have a quote I turn to when sadness hits like this. I think it's buddhist, but I'm not sure.

Death is the lonely raindrop returning to the ocean

May he inspire great words even in sadness.

"Death is the lonely raindrop returning to the ocean"
Wow. I didn't even know the guy and that quote brought tears to my eyes. That is beautiful. I'm sorry you all lost a friend.

Oh gosh, I am sorry to hear this. It's tough to lose an online friend. That's how we first learned the net was human after all, but it doesn't make it easier.

Man, I didn't hear about this until now...

I'm very sad at this news. Chris was a good guy, very kind, very informed. And he had a razor wit at times.

He'll be missed here in the blogosphere.

Thanks for posting about this.

Thanks for letting us know, Pat.

This is terrible news. I'll be posting on this as soon as I pull myself together.

I just heard about this. Feeling very sad. Chris was a sweet man. I will miss him a lot.

Linked to at:
Linky Lovin' The Ladies