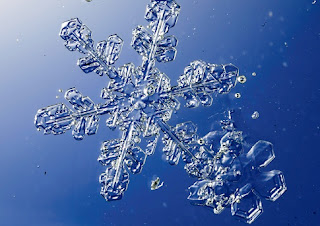 The FMJRA was missing for a couple of weeks because of the hectic holiday season, but it's a new year and a new start so the Round Up is back.

I don't know about where you live, but I live in the south.  I'm in northwest Louisiana and we have pretty mild weather most of the time.  Our most "exciting" weather comes from tornadoes and we have two tornado seasons per year:  April and December.  Other than that, we don't get much.  As a result, whenever there's a chance of a snowflake blowing over from Arkansas or Oklahoma our weather people get so excited they are simply beside themselves.

Last winter there was a chance of icing an sleet predicted and the local news posted talking heads out on the interstate and various highways in three or four different locations to report on "the traffic flow and road conditions."  I felt sort of sorry for them, all bundled up out there in the cold..."Well Jerry, the roads are dry right now and there are no traffic problems at this time!  Everything is flowing really smooth at this time!"  It never amounted to a thing.

They are now predicting some "snow and sleet with an accumulation of up to four inches along the I-20 corridor with higher accumulations along the I-30 corridor" which is basically Arkansas.  I live just south of I-20 so I'm not too worried.  Now watch, this will be the time we get a gorgeous, lovely blanket of snow and here I am scoffing at them.  But, heck - it's 39 degrees right now; it was 72 yesterday.  I don't think I have much to worry about.  But trust me:  this "Winter Storm" will be the lead story on the news for the next two days as his has been the previous two days.  The local news station already has a Winter Weather Storm Watch link on the home page so you can check your emergency supplies list (oh lord I don't want to go near a grocery store today!) and check for school and road closures.

The next time liberals tell you that the deficit is so high because of the Iraq War, send them over to Doug Ross to check out this chart.

Legal Insurrection is pondering the potential of a Ryan-Rubio ticket.  I don't think it's likely but Oh what a dream come true!

American Power has posted part of an essay about the Stieg Larsson novels (which I loved).

Fenway Nation has an update on the Mexican and Central American drug cartels.

Head over to The Daley Gator to read about Obama's $5.00 per gallon gasoline coming your way.

Saberpoint doesn't hold back on how he truly feels about Islam!

No Sheeples Here made me laugh, but scared me a little, too.  There's a poll at the top that says "Should this blog be taken down?"  Go vote NO!

Bread Upon the Waters addresses the bill to eliminate czars and includes a list of czars and salaries.
Stunning.

*Sigh.*  Only Ann Althouse could post something as inane as a photo of sweet potatoes and get sixteen (at this writing) comments.

Bob Belvedere is already tired of John Boehner, and on this particular point, I'd have to agree.

Pundette has an excellent post on that disturbing report that 41% of all New York pregnancies end in abortion.

Pirate's Cove has the latest on the Gitmo detainee transfer situation and Obama's signing statement.

Be sure to read about The Arrogance of King Harry Reid over at Sister Toldjah.

Jim Brown's column this week concerns insurance rates in Louisiana going through the roof.  Not good.

Pecan Corner explains the difference between a tool and a weapon to the nanny state.  Almost ANYTHING could become a weapon, dear nanny state.  Sharp pencils, paper clips, paper weights...the list is endless.

Bride of Rove has an entertaining sift.  Bride, I'm so proud of your Weight Watchers progress!  I'm so impressed!  ...and jealous...

That's it for now.  Check back tomorrow and see if we're snowed in down here.  I'm betting not.
Posted by Pat Austin Becker at 9:11 AM

I don't watch the local weather, I just go to the NOAA website. I check the TV stations websites for closings, if any. You are absolutely right about the ridiculous 'coverage'. It can get embarassing!

Your Stacy McCain link goes to The Daily Gator.

Oh good grief, I am a moron. Thanks Anon.

-Pat, you're not a moron, just a dumb blond [I married one, so I know]. If you want to see a real moron then look to Nancy Pompey Pelosi.

-Thanks for the link.

-Under normal circumstances, I would have given Cryin' John time to 'get it', but we live in such drastic times that we can't afford to muck about.

Well, bless your heart - thanks for the link to my goofy rant! :-)

Speaking of weather, we are getting RAIN today! Hallelujah and thank the good Lord! It's been desperately dry for months.

Weather Underground, Intellicast, NOAA for hurricanes, who needs local news? (for Anything.)

Wolverines!! Now there's a remake I wouldn't mind seeing made, as long as they always showed the original back to back...hmm who could play the roles now though, all the Hollywood types are just unsuitable for the subject, I doubt any of them even know how to hold a rifle, much less an automatic or assault weapon. The USAF pilot role would be easy to fill.