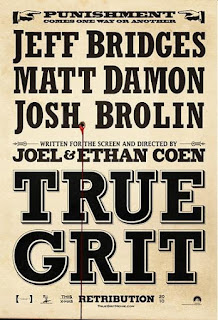 We're going to the movie today.  The last time I went to see a movie in the theater was The Dark Knight

.  But, it's a cold, rainy day and Steve had cabin fever; he's been wanting to go see this remake, so we're going.  We're meeting some friends at The Boardwalk then will cross the bridge to have an early dinner at The Blind Tiger.

I have mom's errands to do before all that, however, so let's get on to the links - EVERYbody has been blogging more than I have this week:

To no one's surprise, I've been doing it wrong for 40 years.  And you know what they say about old habits.

Although my reading table is getting light, I will NOT read this one.

Pirate's Cove has proof that Jared Loughner is not a conservative.

Wait a minute:  I thought Obama told John Boehner there would be plenty of time to campaign for 2012 in 2012?  Not so for him.

I think Herman Cain should hire Fishersville Mike as his campaign writer!

An excellent post from Doug Ross remembering those who died last Saturday in Arizona.

Some thoughts on civility.

American Power on a key test for Gabrielle Giffords.

A Cop's Watch has a solution for DWIs in Austin.  Sort of.

Stacy McCain reveals the secret behind the Tea Party.

Critical Narrative on the recycling of slogans...

Hey, you people who live with snow?  Do you shovel your sidewalks?

Don't miss Michelle Malkin's primer on the "climate of hate."

Beth has adopted a puppy!  It's soooo cute!

Bride of Rove sums up my position on the Arizona situation (and my reasons for not blogging it) perfectly.  Thank you.  Disengage.

Okay - many errands to run in not very many hours so I better get out in the slop today.  Hang tough, friends, and stay dry and warm.

Update:  The movie was great; it stuck very close to the original, I thought, and Jeff Bridges did a fine job stepping into the Duke's boots.  Matt Damon was definitely a better LaBoeuf.   Two thumbs up.  Steve even went out yesterday to get the book and he's having a fine time reading the novel.
Posted by Pat Austin Becker at 10:07 AM

Why would Steve want to see that movie when he's got a wife who is full of True Grit?

Thanks for the linky love.

how was the movie?