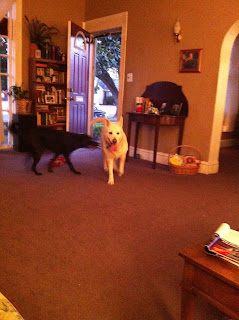 I'm trying to channel Cesar Millan - is that his name?  The Dog Whisperer?

Steve and I have been married since April of last year but have yet to consolidate everything between our two households.  We're scattered here and yon.  The house where he lived has a huge backyard and has been perfect for his white German Shepherd, however, the time has come to integrate her into my household of two dogs, and my smaller backyard.  I have Checkers, the Boston Terrier, and Jazz the young, goofy Lab.

The first day, Friday, was the first time we introduced them.  Steve brought Abby over and I met him outside with my dogs leashed.  We ALL walked around the block, trying to keep Checkers, my alpha female, and his dog side by side.  Jazz is just happy goofy.  He could care a less.  I could bring fifteen dogs in here and he'd be happy as a clam.

Well, long story short, Checkers had a couple of alpha female temper tantrums on Friday, taking the occasional lunge for Abby's throat.  Abby is very sweet and opted not to bite Checkers's head off.  Yesterday was still tough.  Checkers was nervous, tense and quite upset, had another couple of attack episodes, and we had to pull her off.

Nobody got any sleep around here last night.  Abby was pacing, Checkers was tense, and Jazz....well, he was fine.

Today?  So far so good.  When Steve brought Abby today I went out with just Checkers.  We made Checkers and Abby walk side by side around the block.  A couple of times tonight, Checkers has gone tense and into attack mode, but I've been able to deflect her verbally before she lunges.  We're hoping for a a calmer  night.

The weather today was gorgeous!  Nearly 80 degrees and sunny!  I worked in the yard all day, which is why my FMJRA has been delayed.  I filled 15 bags with leaves, clipped, pruned, transplanted, and raked.  I have a lot more to do, but for a mid-winter spruce up I didn't do too badly!

On the reading front:  I have exactly 100 pages left in The Pacific.

I haven't been able to read much during this dog training thing.

Enough about me; let's get to the links.  It's been rather a newsy week:

The Other McCain has extensive coverage on Egypt as does The Camp of the Saints.  Sister Toldjah also weighs in.

The Daley Gator made note of Mike Pence's announcement not to run for the White House in 2012.

The Reaganite Republican posted on the Reagan/Obama TIME cover.  Disgusting.  And don't miss Ed Driscoll's two cents.  Be sure to check out No Sheeples Here - perfect.

Pirate's Cove reminds us that George Bush is a class act.

Classic Doug Ross.  The world is falling apart and Obama is worried about tater tots.

This post from Bride of Rove is just classic, beautiful, and true.  The girl haz skilz.

Okay. It's a short round up, but I'm tired.  I had two hours of sleep last night.  Fried brain.

this weekend.
Posted by Pat Austin Becker at 8:04 PM

the dogs will be fine. i don't know how many dogs we've brought into our home and after a few tense moments, our dogs were fine. some dogs ended up living w/ us, some dogs stayed until we found homes for them and some dogs were lost and were here until we found their owners. we worried about casey but he ended up being friends w/ all of them.

the most challenging was bringing a cat into our home. bella was declawed and actually climbed a wall when casey went nuts when he saw her. over 2 years later, casey totally ignores bella as she walks inches in front of him.

sounds like checkers is a lot like anna. when anna got older, she got less tolerant of everyone...even whitney who lived here before she did.

The doggies will be fine. They always seem to find a way to get along, even when people can't.