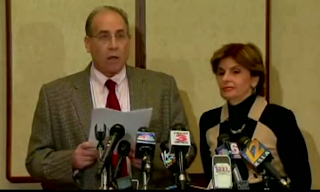 So while I was at work today, only two blocks from my house Gloria Allred and Dr. Victor Zuckerman were here giving a statement at KTBS supposedly corroborating Sharon Bialek's claim against Herman Cain.

Zuckerman is a pediatrician in Ruston, La., a small college town which is home to Louisiana Tech University.  It's about 60 miles from here.

Zuckerman says he was with Bialek at a 1997 NRA convention in which Cain *gasp* actually spoke to Bialeck.  And now Cain seems to not remember her.  Zuckerman can't fathom this.  Because I'm sure he remembers every soul he's met over the past 15 years.  Don't you?

They talked about a new gospel album, Zuckerman says.

And now, all these years later, Zuckerman and Bialek are coming after Cain:

Zuckerman said Bialek told him about the incident in the car when she returned from Washington. "When she returned, she was upset. She said that something had happened and that Mr. Cain had touched her in an inappropriate manner," Zuckerman said. "She said she handled it and didn't want to talk about it any further. I respected her request and the issue was never brought up until recently."


So why is he coming forward now?

Ah, well.  The comments at KTBS are wicked:

Are you freakin kiddin me.The democrats found a guy in ruston that used to date the girl who says she was felt up by the man running for president,but didn't remember till 14 years later that it happened...The guy from ruston didn't see her get felt up but she told him about it so now he's a witness??????If i lived in ruston i'd be mad at this guy for even sayin he lived in ruston....What about her 1 toothed neighbor ??have they found him or her yet???I keep checkin on cnn but i must have missed it.....


If you can stand the tiny window, KTBS has a "one on one" with Allred and Zuckerman here.

So a semen stained dress couldn't bring down Bill Clinton but a 15 year old unreported memory and a doctor from Ruston can bring down Herman Cain?

Added:  Professor Jacobson did a little research on Zuckerman.  Interesting.

First, I agree with Cain, the allegations aren't coming from the Democrats. He blames Perry, Perry blames Romney, but you can bet it's a Republican stirring it up. The timing just isn't right for the Dems to be doing it.
Actually, the allegations about
Cain came out in 2004 when he ran unsuccessfully for Senate. Now there are just more of them.
I say let it all out so they can be vetted. Imagine if there is a smoking gun there and he gets the nomination.
As to Clinton, lots of difference in impeaching a siting president and just not voting for someone in a primary. (Not defending Clinton).
That's about all the wisdom I have for tonight!