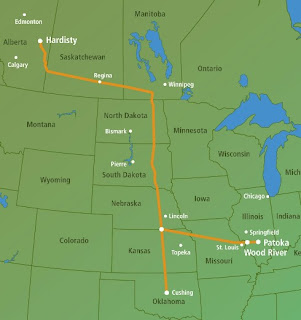 In caving to environmentalists and political appeasement, Obama not only lost an estimated 20,000 jobs but now the Prime Minister of Canada has a different plan for his oil:

Canadian Prime Minister Stephen Harper said Sunday that he was looking at exporting more oil to China after the United States delayed a decision on a controversial pipeline.


In a clearly political move, Obama has "kicked the can down the road," as they say, and hopes that he can at least get the green vote next year.

Apparently adding jobs and energy stability to America isn't part of his "We Can't Wait" campaign.

It is unbeleiveable what this guy, along with congress, has done to our country. How can anyone still support him? We all thought that Carter was the worst pres. in the last 100 years, but Obama is worse.

Wasnt this the same president who only a few short weeks ago was bitching that we don't seem to be capable of creating a Hoover Dam or Golden Gate bridge anymore?

I garuntee you that the KeystoneXL pipeline would've created more jobs than any "jobs" (i.e. tax increase) bill that Obama's come up with so far....