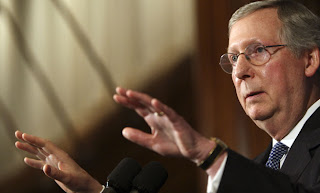 Sen. Mitch McConnell has written a nice piece in the Washington Post arguing the case for the retention of Gitmo:

"The Obama administration has had to take on a number of thorny issues, but few will be as difficult as Guantanamo. Still, some things about Guantanamo are well worth recalling as the administration moves forward. First, not a single detainee has ever escaped to maim or kill innocents. Guantanamo Bay is, above all else, secure and safely distant from civilian populations.

Second, detainees are well cared for. They receive three meals a day. They are free to worship five times daily and provided with prayer beads, rugs and copies of the Koran in their native languages. They send and receive mail. The prison library offers more than 12,000 items in 19 languages (a favorite DVD, according to the librarian, is "Deadliest Catch" and a favorite book is the Arabic translation of "Harry Potter"). Medical care is said to be excellent. It is hard to imagine these men being treated nearly as well anywhere else in the world. Indeed, one European official who visited in 2006 called Guantanamo "a model" prison and better than the ones in Belgium. On my visit, the first detainee I came across was riding a stationary bicycle. This is not Abu Ghraib. "

Team Obama will begin talks today with a high-level delegation from the European Union on the future of the detainees. Some European leaders are now expressing concern about resettling some of the enemy combatants.

“We understand, you have a big problem,” said one European official who said he would speak only if not identified. “And we appreciate what President Obama has said about closing Guantánamo. But that doesn’t automatically mean putting all the remaining inmates on a plane and sending them to Europe.”

For the life of me, I can't see why BHO wants to shut this place down just to keep a campaign promise. I've written about it here, here, here, and here. There are no easy answers, but the best answer is to keep it open and keep the terrorists there.

Posted by Pat Austin Becker at 6:00 AM