You Can Too! Yes You Can! 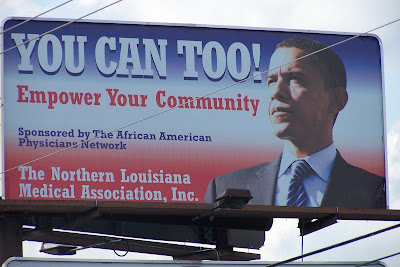 Elvis Presley once said, "I don't like people who are in politics for themselves and not for others. You want that, you can go into show business." I couldn't agree more.

It seems that everywhere I look Obama kitsch is alive and well. I started thinking about it this week when Michelle Obama gave Prime Minister Brown's children replica helicopter models of Marine One, as if to say, "Barack Obama travels in this! Barack Obama is president!" It seemed to be a little presumptive and a bit of self-promotion. Michelle Malkin has written about the Obama schlock which was at its peak during the inauguration. On November 27, 2008, The Washington Post reported that there were at least 96,000 different Obama designs for sale. One could purchase Obama bottle openers, posters, lapel pins, tote bags, lighters, mugs even a life-size cardboard cutout of Obama.

Now I have this billboard at the end of my street. My first thought when I saw it was of those images of Saddam Hussein or other dictators looking down on their people from these huge self-promoting images of themselves.

The history of self-promotion and propaganda art is well documented. Hussein, for example, had huge statues erected of himself, murals on buildings and public walls, posters and banners all about displaying his image for all to see. A reminder of his power. It's a pattern with many dictators: Stalin, Mao, Chavez, ... Even Hitler participated through architecture.

I'm not suggesting that Barack Obama is behind this billboard. It clearly states that the North Louisiana Medical Association, Inc. is involved and that the display is sponsored by the African American Physician's Network. The only reference I can find to that online is that local physician Dr. Albert Powell is the president of this group. To date, I've been unable to uncover much else about the promotion or the organization.

One of the things I admired about Ronald Reagan was that the presidency was never about him. It was about the office, about service to country, about the people of the United States. Peggy Noonan said, "He changed history for the better and was modest about it. He didn't bray about his accomplishments but saw them as the work of the American people. He did not see himself as entitled, never demanded respect, preferred talking to hotel doormen rather than State Department functionaries because he thought the doormen brighter and more interesting."

Mr. Obama and his minions could learn a thing or two from Ronnie.
Posted by Pat Austin Becker at 5:39 PM

Yes - i think of Saddam Hussein, too, when I see these things...

"Mr. Obama and his minions could learn a thing or two from Ronnie."

So could Peggy Noonan.

Did you see the picture of the Obama shelf I took at the grocery store the other day? I think the letter your mom got is right.

Found you via The Other Mccain, and you hooked me with your Elvis quote. Hail to the King!

S.logan,
Welcome from another RSM reader!

Thanks for stopping by!

Any black velvet paintings of the Chosen One show up yet?