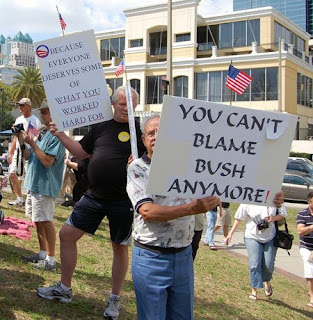 They had a Tea Party in Orlando today. And in Ridgefield, CT. And in Lexington, KY. Instapundit has lots of pictures and some comments from folks that were there. Rachel Pereira has over 100 pictures posted of the Orlando Tea Party, one of which I've posted here, and she reports a huge crowd of 3000 -- and 2 members of the media.

Where is the media on this story? It's all over the blogs and Michelle has been covering it.

The Tea Party phenomenon has been growing and spreading all across the country and shows no sign of slowing down. There's a nationwide Tea Party planned for April 15 and our own Shreveport will be participating in that one.

To clear the record, for those who misunderstand the intent of the Tea Parties, let m 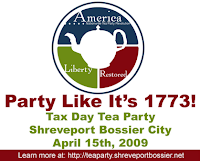 "The Tea Party protests, in their current form, began in early 2009 when Rick Santelli, the On Air Editor for CNBC, set out on a rant to expose the bankrupt liberal agenda of the White House Administration and Congress. Specifically, the flawed "Stimulus Bill" and pork filled budget.

On February 27th, an estimated 30,000 Americans took to the street in 40+ cities accross the country in the first nationwide 'Tea Party' protest."

Here is the link (again) for the Shreveport Tea Party if you want to get involved or attend. There are also events scheduled in Lake Charles, Mandeville, and Baton Rouge. There are LOTS of events scheduled in Texas, including Longview, Dallas, Lubbock, Houston and the Woodlands.
Posted by Pat Austin Becker at 9:32 PM

Let me ask you a question. Where are the daily reports on Obama's popularity? From day one of the Bush Administrations, each and every day, the media reported on how much the country hated him.
Where are the daily showing of the poll numbers, from what I hear are dropping, for Obama?

I will answer your question as to why the media isn't covering the Tea Parties. The media is culpable (and I mean culpable in every sense of the word) of putting Obama in office, and they are not going to allow him to be a failure no matter how much he fails.

As for 30,000 Americans protesting Obama's agenda, it isn't as news worthy as if it had been two people protesting Bush in Booger Hollow, Arkansas.

And for the Republicans, these Tea Parties aren't meant strictly for Democrats. They are meant for all the nimrods in Washington, D.C. and statehouses around the country, so top playing your silly games and do what is right for the AMERICAN people.