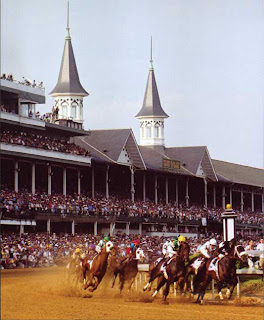 Boy did I oversleep this morning!  Didn't wake up until 10:00!  I haven't done that in years.  Man oh man.  Now I'll feel like I'm running behind all day!

Today is also the day for Bossier Parish voters to get out and vote YES on the tax renewal today to maintain the police and fire departments.  If this doesn't pass then residents can expect layoffs in those departments.  Just remember, Bossier, when the tornadoes came through and those police officers guarded your neighborhoods until stability was restored, you were grateful for them.  When the floods came and neighborhoods were threatened, and police officers again guarded and patrolled your neighborhoods, you were grateful.  When you call the fire department for help, they always answer, don't they?  If the city leaders screwed up by mismanaging funds (and they did!), don't take it out on your neighbors by risking their fire and police protection.

Today is also the day of the Kentucky Derby.  I like to watch the race, but I hate it when something awful happens as it sometimes does.  So I always sort of watch with one eye.  I like looking at the ladies with their funny hats and the old Southern traditions!  My mom loves the Kentucky Derby and my grandfather, in his later years when he was deaf as a post, used to sing My Old Kentucky Home at the top of his lungs.  Off key, of course!  Good times!

And today is the day that Steve is taking me to L'Italiano for dinner because he's awesome like that.  Best restaurant in Bossier City and we love it!  Looking forward to that later!

Okay, on to the links because, like I said, I'm behind already!

Stacy McCain and Sidekick Smitty lead off today with their rockin' coverage of the PA-12 special election.

The Daley Gator is crushed by Linda Ronstadt.

Donald Douglas at American Power notes the expected May Day protests in LA.

Pirate's Cove reminds you what May Day is REALLY about.

The National Enquirer, who broke the John Edwards affair story, now reports that Obama has a mistress in Miss Vera Baker.  Bungalow Bill has pictures.  Reaganite Republican is all over this one.  No Sheeples Here is on this one, too with links.

Althouse got a laugh out of me today!  Ringo!  Heh!

Greta Perry has a message for Senator David Vitter as he blocks a promotion for Brigadier General Michael J. Walsh.  I have a message for Vitter, too:  don't piss off Greta Perry!

Gateway Pundit has a Rush clip and gets in on the sabotage theory on the BP oil rig explosion.

Don't miss Bride of Rove's post on Puerto Rico; she's also got an awesome round-up here and she has a message for Obama: "Hey Mr. President! Our men and women in uniform aren’t getting any so you need to reign that gerbil in until you bring our soldiers home."  Yikes!

Pundette also notes Obama's response to the BP disaster, and Legal Insurrection has some observations as well.

I know Fishersville Mike will be watching today's Kentucky Derby, too!

Camp of the Saints linked to my Dr. Donald Berwick post and expounded further.

Caught Him With a Corndog notes Arizona's move to demand proper English in the classroom.  Horrors!

And it's all about Arizona this week, with Left Coast Rebel covering the shooting of an Arizona deputy by an illegal.

Bread Upon the Waters discusses New York's assumption of your body parts.

There's more, I know, but I'm behind!  Time to get moving!  I'll catch up with you guys later; have a great Saturday!

I have already received 2 photos from Facebook friends of themselves at the Derby today. They are cruel that way!!!!

Thanks Pat- always an honor to make the cut at ASiGiS!

Thanks for linktastic inclusion. This too was a good post from Mind-Numbed Robot. I think he has astute observations in the arena of calling Bee eS on Barry.

Thanks for the link. Yes, I am pissed over this one!!!!

What an exciting race...almost spilled my Mint Julep.