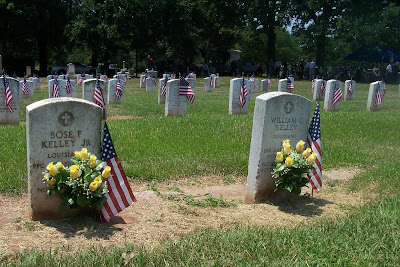 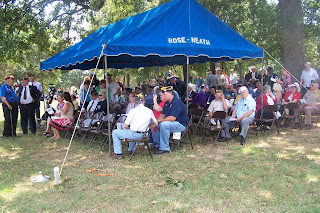 That's what Steve said yesterday after we attended the Memorial Day Services at Greenwood Cemetery and I had lamented the poor public attendance of the event.  The service was very moving and was a lovely way to pay tribute and remember those that have paid the ultimate price for our freedom.  But very few people were there beyond the participants.

I've written before about Greenwood Cemetery; it's not too far from my house and there's a huge Veteran's section there.  It's a very old and locally historic place; very beautiful.  The American Legion had placed flags by every veteran's grave.

The service yesterday was sponsored by Disabled American Veterans Chapter 30.  The Parkway High School AFJROTC assisted by doing the presentation of colors, a flag folding ceremony, and served as escorts to the organization members laying wreaths.  The Gold Star Mothers and the Gold Star Wives were particularly moving to me.  There was even a kilted fellow who played Amazing Grace followed by the Parkway AFJROTC who played Taps. 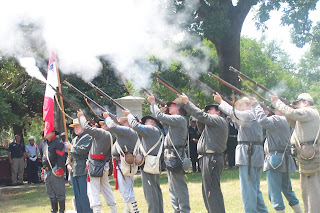 The Sons of the Confederacy were there as well and closed things out with a 24 gun salute.  Awesome!

I was really sorry that the event was not better attended but I have to wonder if people just didn't know about it.  I assume they do this every year; today, I believe, they are doing the same ceremony at Hillcrest Cemetery in Haughton.  I found out about it quite by accident; in checking my SiteMeter yesterday I saw that someone had found my blog by searching "Memorial Day Shreveport."  Curious then as to what actually might be happening around here on Memorial Day, I did the same search and found a little blurb in The Times about the ceremony. So, I know it was in the paper.  I don't take the paper.  It's a liberal fishwrap and has very little to recommend it.  Most of the news is a day or two old and the editorials are heavily biased.  They did publish one of my features once which was about the state legislature and the budget.  When I submitted one on Cap and Trade they rejected it because "it wasn't of local interest."

That said, The Times today did have a nice article about yesterday's event.

At any rate, maybe next year more people will attend the Memorial Day service; maybe the one in Haughton will have better numbers today.

But sadly, like Steve said, to too many people it's just a Bar-B-Que day.  Sad.

We rushed home after the services to get ready for a wedding at the beautiful Caspiana Plantation.  It was the wedding of the daughter of a dear friend of mine. 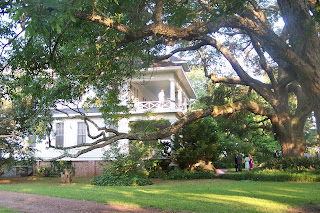 I love weddings and this one was beautiful.  The house is at the end of a long driveway just off highway 1.  Ancient live oak trees wrap their branches around the house seeming to hold it safely against the storms and winds that come off the surrounding fields.  The guests sat in chairs arranged in the front yard and we were all given folding fans as a gift for coming.

The beautiful bride arrived in a buggy drawn by a white horse and after the ceremony she and her groom left the same way.  Actually, they rode around to the back of the house where the reception was.  There we spent the rest of the evening eating, dancing, celebrating long after the sun had set.  Good times had by all and congratulations to Mr. and Mrs. Daniel Borel!

Today, we're going back to Greenwood Cemetery to place a few flags.  On one of our previous visits there, Steve and I found the grave of one Bose F. Kelley, Jr.  We noted it at first because next to it is the grave of  William C. Kelley and we thought how sad it was that this family lost two sons in World War II.  Then Steve gasped and said, "Oh no!  He died on D-Day!"  We did a little online research and found that Bose Kelley was a part of the 507th Parachute Infantry Regiment and died at Normandy.

We're going to put a flag out for Bose Kelley and (his brother?) William, one for my dad, my grandfather, and my godfather, and maybe a few more.  There's a Purple Heart recipient in Greenwood Cemetery (well, probably lots of them) and we always leave a flag for him, too.

So, after we go set out our flags we'll come back home and THEN we'll fire up the Bar-B-Que!

Have a nice Memorial Day and take time to remember the reason for the holiday.
Posted by Pat Austin Becker at 8:57 AM

Pat, a good Memorial day article, but especially thank you for bringing Bose Kelley, Jr. to our attention. We are unaware of some of the heroes in our midst and we need to be made more aware.

What a great article! Thank you for making the day meaningful. I have not visited the local cemetery yet, and perhaps I can do so today. Appreciate the reminder.

I don't remember Memorial Day events as a child but it was the day when we went to all the cemeteries in the area with rakes, hoes, mowers and shovels and cleaned our family graves.

The pathways and aisles were mown but the graves themselves were attended only by the families or others interested in trimming the briars, uprooting small tree seedlings, filling in sunken graves, planting short grasses and wildflowers that would bloom in season.

Like the Bob Dylan song says "see that my grave is kept clean". :-)

Well put, Pat, and thank you.

Also, it was nice to hear about the start of a new life of a couple as one.

Linked to at:
Their Truth Is Marching On: Memorial Day 2010