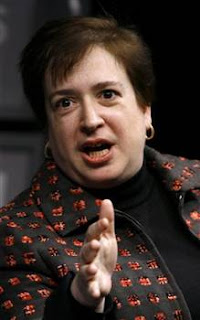 Word is out that Obama will nominate Elena Kagan for SCOTUS this morning.  The internet is already ablaze with buzz on Kagan and what her nomination might hold.

Start with Ed Whelan at The Corner who recognizes her intellect but lists several objections.  Call me odd, but shouldn't a Supreme Court justice have some experience on the bench?  Kagan has none.  This is not a plus for me.

Legal Insurrection notes the irony of the Kagan pick.

While she has no bench experience, The New York Times outlines Kagan's rise over the years.

Keep an eye on Memorandum today for the explosion of Kagan stories.

McCain is having a great deal of fun with the Lesbian angle on Kagan. The Right won't say anything about it for fear of charges of bigotry. The Left won't say anything because they thing we won't know, and that our only objection would be her choice of bedmates. So, everyone who Google "Elana Kagan Sex Tape" or whatever, gives his blog a hit, which helps his ad revenues. Conservative Lesbian bloggers are in on the joke and having an unseemly amount of fun with it. They/we ought to be ashamed. We're not!;)