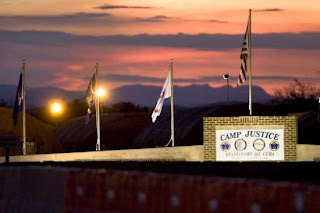 The problem of Gitmo is taking new shape this week with a couple of interesting developments.

The WSJ reported yesterday that Defense Secretary Robert Gates "said the Pentagon wants $50 million in case it needs to construct a prison facility on American soil to house as many as 100 Guantanamo detainees who couldn't be brought to trial or released" [emphasis mine].

Supposedly this is on top of the $80 million he wants to close the facility and relocate personnel.

It's only money. We've got plenty.

There are still 241 enemy combatants held at Gitmo. Accordng to Eric Holder, thirty have been cleared for release. We know about the 17 Chinese Uighurs, but what about the others that have been cleared? Who are they? Where are they going to be released? Nobody has said.

The WSJ article also points out that "Shifting prisoners from Cuba to the U.S. could have legal repercussions. Although the Supreme Court has ruled that Guantanamo detainees have habeas corpus rights, allowing them to challenge their detentions as unlawful, Bush administration lawyers believed federal judges would be more likely to apply constitutional protections to prisoners held on formal U.S. territory."

There would be other repurcussions besides just the legal ones. Nobody wants these guys in their backyard. To place them in prisons on American soil would simply serve to endanger American citizens. Part of the reason that Gitmo has been the perfect place for them includes the fact that it is so isolated.

Senator Brownback said leaders of several Muslim nations told him they would stop sending military officers to Fort Leavenworth in Kansas for professional training if the detainees were incarcerated there. It seems the only state willing to take them is Montana, and that prison is not even maximum security. In fact, Gitmo has already be retrofitted to accomodate the unusual needs required in housing enemy combatants determined to get their hands on an American.

Further muddying the waters is this report from the NYTimes (via Memeorandum) that the Obama administration is now likely to resume the military commission system for trying the enemy combatants, the same system Obama criticized when Bush did it.

"Administration officials said Friday that some detainees would be prosecuted in federal courts and noted that Mr. Obama had always left open the possibility of using military commissions. Still, during the presidential campaign Mr. Obama criticized the commissions, saying that 'by any measure our system of trying detainees has been an enormous failure,' and declaring that as president he would 'reject the Military Commissions Act.'"

And like Ed Morrissey at Hot Air, I especially love this comment: “The more they look at it,” said one official, “the more commissions don’t look as bad as they did on Jan. 20.”

Wouldn't it have been nice if they'd looked at it better BEFORE making a stupid campaign promise to close Gitmo down? Did they think they'd be able to just come in there and open the doors?

It's always been clear to most everyone that the military commissions are the best way to try enemy combatants captured in foreign countries. They are not entitled to the same rights and priviliges that American citizens are and they are not tried in the same way.

I guess it's true that all of Obama's statements have an expiration date. As Jules Crittenden weighs in, "I think that Change shark just officially got jumped." Amen.

IBDeditorials had a perfect summation of it all yesterday:

"The best place for the detainees at the Guantanamo base is right where they are. Why waste $50 million in taxpayers' money for new construction costs, as well as the tens of millions that were already spent to build facilities that will be, in Gates' word, mothballed? To gain nothing but hollow political points?

"At Gitmo, the detainees are free to face Mecca when they pray. They have access to Islamic reading material and eat hot halal — approved by Islamic law — meals.

"They are not in stocks, stretched out on the rack or systematically beaten. They are exactly where they should be. Pragmatism, not politics, is what should determine their location."

Posted by Pat Austin Becker at 9:36 AM

I have a few posts about the so-called "torture" debate. It seems the main legal findings that liberals and leftists have problem with is that 1) terrorists actually want us dead, and 2) George Bush did it. Well, it gets more in depth than that, but that pretty much sums it up.