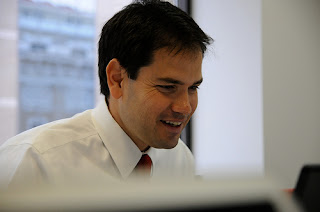 Florida Senate candidate Marco Rubio was on Sean Hannity's radio program this afternoon. The interview was very brief but Rubio made some important points.

He told Hannity that he believes politics "can't be about popularity anymore" and that, as conservatives, we must regain our focus on the issues. Remarking on his low poll numbers, Rubio said that most Floridians simply don't know who he is just yet, but that he expects that a year from now the polls will be very different. I agree with that! Especially after Crist just broke his promise in Florida not to raise taxes.

Hannity asked Rubio how he feels about Crist and why he decided to enter the race. Rubio explained that he disagrees with Crist standing on stage and applauding Obama on the Stimulus. "I have four children," he said, "and it's absolutely unfair what we're doing to their generation." He said that for the first time, children will be inheriting a country worse off than what their parents had.

Rubio then said that the reason he believes Obama won is because "he stole our language"; Obama used the language of the right when he talked about middle class tax cuts. "The more Republicans are like Democrats then the less need there is for Republicans." He also added that both parties are to blame for our current economic situation.

Rubio is an excellent conservative candidate and it becomes more clear with each passing day that Cornyn and the NRSC spoke too soon in their endorsement of Crist. I'm with Rubio - I can't wait to see what the polls indicate a year from now in Florida.