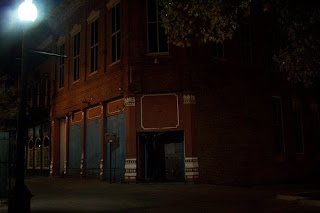 A little Friday evening time trippin'. Steve and I went to eat at one of our favorite local restaurants tonight - The Blind Tiger. Amazingly, we were carded when we ordered beer and trust me, we do NOT look like we just graduated from high school. I could easily have been that kid's mother. I laughed and told Steve that we ought to ask for his ID because he didn't look old enough to even serve alcohol. Sure enough, when the beer came it was another server who brought it with our little fella right behind him. I ordered another beer just out of meanness.

At any rate, we love the restaurant; it's down on the Riverfront and every time I go down there I seem to lapse into a little nostalgic time trippin' thing.

It started tonight because we were looking at the architecture of the old building which houses The Blind Tiger. We began debating whether part of the building was an add-on or not, which led us to scoping out the neighboring buildings to see how they lined up. This is where I needed my friend from Sippican Cottage - he could tell me right away.

At any rate, as we were scoping out the exterior of the buildings, we wandered down the alley which, back in the day, used to be a happening night spot area. Shreve Square in the late 70s and early 80s was a fun, busy spot. All us kool kids went there. Great bands, great nightspots, great places to eat...you could sit under the bridge with a longneck in your hand, watch people and listen to music all night long.

The above picture was Humphfrees; they had beer iced down in huge galvanized tubs, picnic tables and long benches for seating. The best up and coming bands played there. A Train, Marcia Ball, The Bluebirds...too many to name. Some truly great musicians crossed that stage.

We wandered down the alley where The Sportspage used to be. The Sportspage had live bands, hip music, three bars and two levels. I got into The Sportspage when I was 16 because my older sister knew the doorman (legal was 18, then). Now, the twelve steps leading up to the entrance of The Sportspage are gone and Steve had to lift me up to peek in the broken out part of the old wooden door to see inside. Not a pretty picture.

I could see the lower level bar area, the dance floor and the stage area, and the stairs leading up to the second level. It's a totally weird feeling looking at the absolute ruin of a place that you remember so clearly in your head. Dirt, debris, boards, wreckage and dust everywhere. A home for rats, drunks, the homeless. It was sad looking in there.

But the fun was only beginning. From there, after we'd worn out the debate over the architecture of the riverfront and the good times in the Square back in the old days, the naming of all the places long since closed down, we headed home and on the way we passed by the old historic Greenwood Cemetery.

Steve: I've always wanted to go in there.

Me: There's the gate. I have family in there!

So in we go. I couldn't find my people - I took a wrong turn. But we eventually ended up in the old military section and it was kind of sad. It was sad because the whole place seemed to be in such disrepair. The headstones in that part were all perfectly uniform but some are sinking and some are covered in mildew or algae. Some are turned over and broken. Several have long faded plastic flowers and droopy flags. Standing in the center of the section is an old cannon (pointing downward - this bothered Steve) and a tattered, faded flag.

It was interesting to look at the headstones, though, and think about the men. A couple of the headstones had newer markers near them for the spouses and some of those had 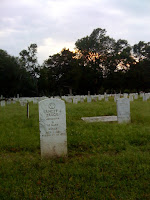 pictures. Young, strong fellows in uniform - brave looking and ready to take on the world. One soldier with his wife, also in uniform, jaunty, happy and young. I kept thinking - where are their people? Does anybody come visit or think about them?

After I got home I did some checking and found out that there is a cemetery clean-up day scheduled there in a couple of weeks. I'm trying to find out who to get in contact with to get the flag replaced because we'd certainly donate one to replace the sad one that is there.

All in all it was not your typical Friday night date night, but I guess that's why Steve and I get along so well. We're both oddballs. I don't know anybody else that would take me into deserted alleys, boost me up to peek in dilapidated buildings I frequented as a teenager and then take me to a cemetery.

If it helps any, we went to Sonic after that for a hot fudge sundae.