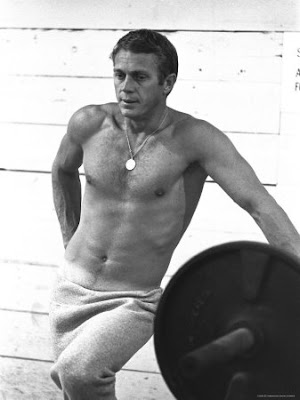 Your gratuitous Rule 5 picture this week is Steve McQueen. After reading Gary Horne's Oh For a Western in American Thinker, I thought, "By jove! He's right!" and thought about one of my all time favorite westerns - The Magnificent Seven. Real men! No metrosexual, wine sipping, wagyu beef eating, designer suit wearing guys there! No sir!

So what are we missing from the movie cowboy? What values did he possess?

1. Integrity The cowboy is true to his values. Of course, one has to have values first.

2. Courage The cowboy is brave enough to stand up for his values in the face of danger. He is willing to confront evil and do battle with the guys in the black hats.

3. Straight Talk A cowboy is a man of few, but honest, words. He says little, but when he talks he says something worthwhile. A cowboy would never spend five minutes spouting lawyerese and convoluted language leaving you asking, "What did he say?" In other words, no BS.

4. Dependable He never lets his friends or his horse down.

So on that note, on to linkage,

Troglopundit has been on a crazy link-fest filled week this week linking pretty much anything that anybody would send him. I even cashed in a couple of times and he changed my name to "Sue," then fixed it. I kind of liked Sue. It was a great, benevolent blogging strategy and he gained a reader in me, even if he did call Stacy McCain a big doodyhead. Check him out.

Robert Stacy McCain, always entertaining, had me going this week. He posted the Speedo picture again - oh my, and he took on Meghan McCain in a couple of posts here and here, sort of. It was National Offend a Feminist Week, after all.

Donald Douglas at American Power had a great post entitled Mainstream Bigotry and Racism on the Democratic-Left that you should read.

Gateway Pundit has a great clip and commentary of Bill O'Reilly taking Obama to school on his bogus Churchill reference.

Professor Jacobson takes on Pelosi's credibility - what little of it there is, and also reveals himself to be a Yes fan! Woot! Good times! I loved them myself, back in the day.

Carol at No Sheeples Here is the MASTER of photoshop! Don't get me wrong - her posts are equally great, but you can't help but laugh at her treatment of the ScareForce One shot! Love it!
Makes me want to go learn Photoshop.

Pundette tipped me to the cowboy article referenced above, but she also has a great post on Obama asking for a private screening of Star Trek. Some of her commenters seem to have taken her to task for it, but I'm on her side. He's without class, Pundette. He can't help it.

Critical Narrative had a post on the Chinese ships harassing our American ships - first I'd heard of it, actually. I read a lot of news, but missed this one. But, as Yukio points out, the media is pretty much ignoring it.

Check out the progress of Darrell Rebouche's baby raccoon rescue!

Susanna takes on Obama's hypocrisy and has cute puppy pictures, too!

Cynthia Yockey no longer *hearts* Joe the Plumber, and be sure to check out Obama eating a hot dog. Great picture.

Enough linkage for now. The Barksdale Air Show is flying over my house and I have to run out on the deck and stare at the sky. Steve and I have a wedding to attend tonight (no, not ours) and I have things to do. So go read something.
Posted by Pat Austin Becker at 1:05 PM

You're supposed to link to RSM any time you use the phrase "big doodyhead." That way anybody googling the phrase finds him. As he himself would say: hits is hits!

I totally messed up the link in my linkage. Here's the good one... you know, the one that doesn't take you away from my blog lol

LOL - I was going to be all "Where's my invitation?"

Several years ago I read a Christian themed book about how young men should act. It said that God made men and women to be different for a reason, and it was o.k. for a young man to be masculine.

The book also said that somewhere along the line society has replaced the John Waynes for the Alan Aldas as role models for young men. (Not that John Wayne or Alan Alda are perfect or bad people. But one personified a man who stood on principle, while the other portrayed characters who would compromise rather than stand for what was right.)

There has been a couple of good westerns filmed in the past few years: Tombstone, Wyatt Earp, Open Range...

Kevin Costner's and Robert Duvall's characters in Open Range are people I would have liked. They were men who wanted to be left alone, they didn't bother anyone, but when they were pushed, they stood up for what was right, and their friends.