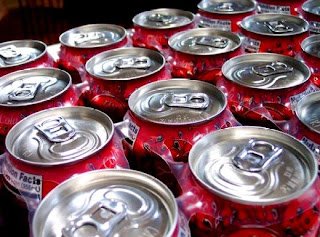 A tax on soda to pay for health care? You're going to up the cost of my Diet Cokes to pay for somebody else's health care? Because I already have health insurance that I pay for, so I'm good. Now I have to pay for someone else's by drinking more soda? Sort of like my mom's cigarette smoking paying for the SCHIP program.

But wait, my Diet Cokes aren't "sugary" - they're diet! Does that still count?

What happens when people cut back on soda consumption in protest? Does the government health care program go under? I know plenty of people who are smoking less or not smoking at all because of the huge tax increase on cigarettes that went into effect in April. I expect the same thing will happen with soda. Oh, I know. You're going to tell me "what's a few cents a can!? Get over it!"

Precedent. That's what it is. Where does it end? Remember "the oath" in Atlas Shrugged? "I swear - by my life and my love of it - that I will never live for the sake of another man, nor ask another man to live for mine."

Seriously, this health care business is crazier than a run over dog. European socialized medicine is NOT what Americans want or need. Folks need to wake up in 2010 and put a stop to this runaway train.

Not my steaks! Please! No!

Update II: More to the subject of health care rather than soda tax, Hot Air posted this Townhall video which is just chilling. Commentary from Ed Morrissey at the link:

Basically, the elderly or the very ill are expendable. Is this really where we want to go?
Posted by Pat Austin Becker at 4:25 PM

It's a twofer. You save money and you also get to increase the rate of death among a sector of the population that is unlikely to vote for Obama. So when you're a sensitive liberal who is very sensitive to the needs of Barack, you do the sensitive, caring thing.

Federal vice taxes are idiotic. They give a blanket number and tax everyone at that price no matter what. State vice taxes work better since the state knows exactly who its trying to tax and at what price it'll dissuade said people. If the Feds want to pay for health care... CUT SOMETHING.

I wrote on vice taxes. You can read it hereThanks for the inspiration. I've had a few dry days of thought.

Jordan, I think one of the main premise of what most conservatives have been screaming about for years is more control to the local and state levels and less to the federal, and just for the reason you stated. Just how in the world can a representative from New York know what's good for Wamsutter, Wyoming (yes there is a Wamsutter, Wyoming, spent the night there once.)
And when you go to the state and local levels, why should state, or even federal, tax revenues go to pay for the Pig Knuckle Festival in Hogwallow, Arkansas (not a real town). When it comes to a particular level of government, let those who benefit pay for it. You will then probably see a bunch of wasteful spending be curtailed that way.