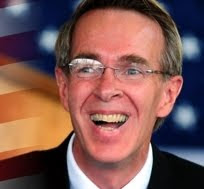 LOTS of articles about NY-23 this morning! As Stacy McCain says, it's "Hoffmania!"

American Thinker has a piece by Bruce Walker in which he says:

Supporting Doug Hoffman, the Conservative Party candidate in the 23rd District, ought to be the easiest decision any conservative has to make. If he wins, his victory is a major trumpet call in the election twelve months from now. But even if he loses, and the Democrat Owens wins, conservatives are better off. The chameleon Republicans like Jeffords, Chaffee, and Specter have prevented the real debate that Americans hunger to hear: the conservative voice of liberty, traditional values, and love for America against the leftist voice of group-buying, anti-religious, and unpatriotic enemies of what has made us great. Hoffman is the easy, obvious choice.
And then we have American Specator and Stacy McCain's piece in which he gives us background on Hoffman's humble beginnings:

Given his hardscrabble upbringing, Hoffman's sympathies are clearly with the conservative grassroots. He was able to get a college education only because his excellent academic record in high school inspired local businessmen to establish a scholarship fund to assist him. Joining the National Guard also helped, and he served a total of six years in Guard and Army Reserves before finishing his enlistment as a staff sergeant. Shortly thereafter, already married with two young children, Hoffman completed his MBA at the University of Connecticut and returned home. At age 27, he became controller -- that is to say, the chief accountant -- for the 1980 Lake Placid Olympic Organizing Committee, responsible for a multimillion dollar budget.

Scozzafava's campaign hasn't had a good week, taking hits almost daily from conservative grassroots organizations and websites and in the media. Last week, just about every major conservative political website and organization called on Scozzafava to step aside after it was revealed that her husband called the cops on a Weekly Standard reporter who was politely asking the candidate tough questions about her support for card check legislation. Scozzafava's husband also approached local Democrat party leaders earlier this year about the possibility of her running on the Democrat party line should the Republican nomination not take shape.

And, of course, The Washington Post weighs in on Palin's endorsement of Hoffman:

Sarah Palin's decision late last week to endorse the Conservative Party candidate over the Republican nominee in a special U.S. House election in Upstate New York is the latest example that the former Alaska governor's allegiance is to her conservative principles rather than the party's edicts.

Hoffman is making real gains; it's not too late to send some cash so he can continue the momentum!
Posted by Pat Austin Becker at 9:38 AM