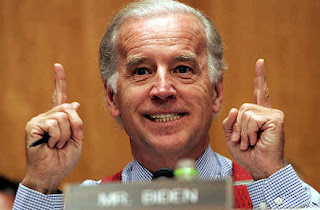 How nervous must the Democrats be about NY-23 to send Joe Biden to campaign for Owens? And he's bringing country singer John Rich with him.

Via Memeorandum, Biden is heading to upstate New York to make an eleventh hour push for Bill Owens. This is basically a two man race now between Owens and conservative Doug Hoffman. Dede Scozzafava's campaign has collapsed faster than the Chicago Cubs season did this year. With the RNC now welcoming Hoffman to caucus with them once he wins, Scozzafava must be steaming.

Politico reports that the Biden rally will be Monday in Watertown:

The visit by Biden underlines how badly national Democrats want to snatch this seat, Republican-held since before the Civil War, from the GOP. But it also reflects Democrats' 11th-hour efforts to avoid a clean sweep Tuesday of the three mostly closely-watched races. With Republicans almost certainly winning the Virginia gubernatorial contest and the New Jersey governor's race very much up in the air, the upstate New York congressional race may represent the party's best chance for victory.

We can only hope Stacy McCain will stick around up there to cover Biden's visit; maybe some more shoe leather donations would help!

Allahpundit reminds us how "popular" Biden is lately.

Update: Add one more reason for Scozzafava to get steamed: Rep. Issa, who supported her previously, is now backing away from her and is overnighting Doug Hoffman a $5,000 check!

(Cross-posted at Not One Red Cent!)
Posted by Pat Austin Becker at 4:21 PM

I'm sure Owens is elated- lol

Owens' elation, if it exists, may be a bit premature.

There still is a substantial conservative sentiment in this country. Republicans cannot survive by co-opting Democrat principles, because Democrats own the Left. People who want Democrats will vote for real ones. Republican imitators need not apply.

I disagree. Joe Biden? Dems must not want it that badly. LOL

I think the appellation Conservative is not helpful.

How about small government Republican?