Full Metal Jacket Reach Around: The Fourth of July 2010 Edition 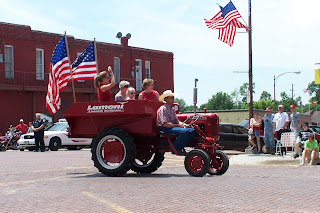 Happy Fourth of July!  I'm a day late with my FMJRA but I'm guessing it's okay.  We're keeping it small today, having a couple of friends over and grilling later this afternoon.  There's a huge fireworks celebration down on the riverfront tonight with bands and such, but neither Steve nor I are crazy about big crowds or excessive heat OR traffic, so we usually keep it close to home.  I'm glad Shreveport has something like that for the folks that enjoy it, and there are plenty of them. 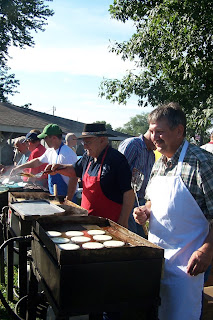 One of the very best Fourth of July holidays I ever spent, besides some fond memories of my childhood, was a few years ago when Steve took me to Iowa.. It was my second visit there.  His sister lives in a small town (pop. @2500) in southern Iowa.  To me, it is ideal Midwestern, all-America, perfect.  We started out the day with an early morning drive to Allendale, Missouri where the entire town (pop. @55) gathers on the green and cooks breakfast.  There was a little patriotic program, music, and while that was going on, you could go through the serving lines and get homemade sausage, fried eggs, bacon, pancakes, toast, coffee....; everyone sat at long tables in front of the bandstand and had breakfast.  Steve bought a cookbook for me that day from the ladies of the church.

Then we drove back to Lamoni, rested a bit, and went to the Fourth of July parade: teenagers rode their prize horses, decorated with stars and bows, tractors, flatbed trailers decorated for the holiday, the town's firetruck...it was great!

At the end of the day there was a cookout in his sister's backyard; hot dogs and s'mores. After dark we drove over to the football stadium (I think...it was dark) and watched fireworks.  A perfect day, and I think that's when I realized I could absolutely live in a small, small town and forgo all the big city "advantages" for a life like that.

Okay, enough waxing nostalgia; let's get on to the links!  I have new memories to make today.

Doug Ross has done some great work this week and I'll highlight a couple of posts:  first is this one about how Bank of America will charge employees for health care based on their salary.  This is not a good thing.  And here is Doug's post about the media blackout of the Gulf oil crisis.

And omigod don't miss this report by Gateway Pundit about Team Obama sending goons to shut up Billy Nungesser, who has been very vocal, as you know, on television.  Incredible.

Smitty at The Other McCain also chimes in on the Gulf media circus, as does Obi's Sister.

Althouse (who has never linked me, by the way) does, from time to time,  some hilarious interpretation of Drudge's images.  This one is great.  She's had her camera out again and has some great shots.

Pirate's Cove lists some great things about America.  Can you add to his list?

Pecan Corner has some eloquent thoughts on the oil spill.

They had a Fourth of July parade where SWAC Girl lives!

Bread Upon the Waters has one of my favorite scenes from the John Adams miniseries.  Perfect.

DaTechguy has a book recommendation and I'm already on it.

I'm having fun with this new blog; anyone who has ever looked at a catalog will think it's funny.  Scroll through and read all of them.  Some had me in tears!  Catalog Living.

Donald Douglas also went to a Tea Party yesterday.  He, too, noted that there were fewer signs than before.  What's up with that?

My Bossier has a little patriotic musical interlude.  So does Caught Him With a Corndog.  Go ahead.  Go listen.  I'll wait.

Adrienne's Corner reminds you what happened to the men who signed the Declaration of Independence.

Wyblog reminds us that the Bush tax cuts are about to expire and what that will mean for you.  Scary.

I'm going to Pundette's house for my Fourth of July dessert.

Finally, be sure to check out C. L. Bryant's One Nation Back to God page.

Okay, I'm taking the rest of the day off to celebrate the Fourth.  I'll be back, rested, rejuvenated and ready to fight tomorrow.  You do the same and have a happy and safe Fourth!
Posted by Pat Austin Becker at 10:04 AM

(And thanks for the link.)

i'm glad one of your best 4th of julys was spent here!

we made chicken salad and deviled eggs and are packing up a picnic to go to mom's. we are gonna eat on her patio and watch the parade. it goes right by her apartment and we'll have the best seat in town.

grandma's house advertised her giant tenderloins and potato salad but mom would rather have chicken salad. i thought of you when i saw the ad.

wish you were here!

I just noticed I spelled Allendale wrong; I fixed that now. I put Allenda. Duh.

Y'all have fun. I'm going to get there next summer some way or another. I'll hold my breath and turn blue, or something.

Oh and by the way, Sheryl, I'm making Suddenly Salad today in your honor! :)

What is Suddenly Salad? Recipe, please...

Thanks for the link and have a great holiday!

Suddenly Salad is a Betty Croker pasta product. There's different flavors, and some are better than others. It's something easy to throw together for occasions like having friends over.
There is a family joke behind Suddenly Salad, my sister is addicted to it, and Pat likes it, too.

Happy 4th! I remember the 4th of July's in the western New England hilltown where I grew up having a distinctly Norman Rockwell feel to them....well....because that's where Norman Rockwell lived.

Because the OTHER basketcase blue state I moved to is pretty much bankrupt, some cities and towns around here are going without fireworks altogether. That would've been the case here, too except one of the Indian casinos stepped in to pick up the slack this year and last year.

Thanks for the link, Pat, and a Happy Independence day to you!

(I've linked back in the Patriotic Pinup post today)

did you make cake?

Thanks for the linkback ;-) Happy Independence Day to you, a great American. Let's keep up the fight, let's ramp it up and let's win our country back!

I just watched 1776 and Yankee Doodle Dandy, and now The Boston Pops are on. It's a Grand Old Flag.

Happy Independence Day, Pat, to you and yours!

Thanks Pat, much obliged-

Have a great Independence Day- and may God bless the USA

Thanks for the link! Happy Independence Day.

Hey thanks for the link! and for turning us on to "Catalog Living" along with the great patriots. Hope everyone had a great Independence Day. Around here it feels like the whole town, me included, woke up on the 5th and said "ok nap time"! Heh. May it continue a while!

Word of the Day is: "visqual"