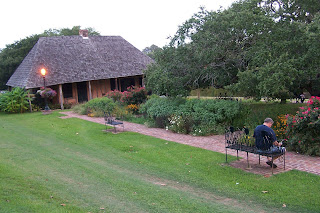 I'll share one more picture from Natchitoches with you and call this the Natchitoches edition.  I've spent the past couple of days getting caught up on things and working in my classroom at school.  In case you missed it, I'm moving rooms for the fourth time in ten years and it's a lot of work.  I'm not even going to go in to it, but suffice to say, this has not been a happy move.

One more week of summer vacation and I want to do as little as possible; my reading stack has grown rather than decreased over the summer.  I'm going to work on that a little.  I'm just starting the Stieg Larsson trilogy and am loving that!  I love a book you just can't put down!

I haven't paid a lot of attention to the news this week; as I suggested last night, I think I've just been on mental political hiatus lately.  That's probably a good thing because my batteries will be charged and ready for the fall elections.

That said, let's get caught up on what my fellow bloggers have been doing:

William Teach notes Obama's pronouncement that the economy is growing but isn't buying the cheerleading routine:

That said, Obama is not cheerleading, he is clearly delusional. Growth is slowing, people are tired of the high unemployment, and people are tired of being unemployed. Companies are sitting on their earnings, since they are unsure what this raging clueless neophyte partisan hack will push for and/or do next. He picks and chooses which parts of the economy he wants to increase, and which ones he wants to damage.

No Sheeples Here has a heart-warming story of a soldier reunited with a dog who saved  his life.

Legal Insurrection has a good post on the Weiner meltdown.

The Other McCain is asking for help for a fellow blogger, a CPA about to lose his home because of prolonged unemployment.

Pundette makes note of the whooping cough epidemic in California.

This is a perfect recap of Obama's presidency so far; Reaganite Republican nails it.

American Power digs out info on the back-door amnesty memo.

Wyblog examines Obama's ever expanding control over the internet.

Camp of the Saints:  Oh.My.God.  Seriously.  This is just awful.

Over at Catalog Living, Elaine should have known better than to trust Gary to build the fire.

i clicked on the pic to make it larger to see if that was steven sitting on the bench. wow! what beautiful landscaping! (the flowers...not steven.)

Thanks, Pat, for the love.

Recharge those batteries good and hard.

Thanks for the shout out Pat and welcome back!

Thank you for referring Tina to me for a graphics project. I told her I will gladly to the project.

I have added you to my A List of bloggers. I should have done so a long time ago.

Much obliged Pat, sure appreciate the kind words- welcome back