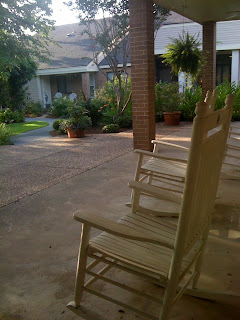 It's Saturday again, already?  Wow.  Two more weeks of summer vacation.  We may have the situation with my mom under control now.  We've moved her from the hospital to The Glen, which if you aren't from around here, is a retirement community.  It's quite lovely and I snapped this photo is of the garden and porch just off one of the main common rooms.

Mom is in the rehab wing and has her own room and plenty of people attending and fluffing her daily.  Her lifelong best friend is in the assisted living wing and has been living there for about a year.  We transported Mom from the hospital around 12:30, I signed paperwork for what seemed like 30 minutes with a very sweet girl named Jennifer, and then I left to go get some things from Mom's house. 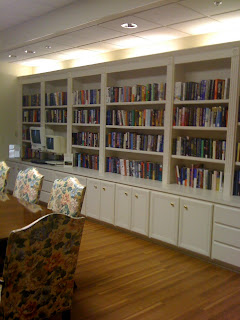 When Steve and I arrived later in the afternoon, Mom's friend was already in there, scotch in hand, visiting.  Mom was eating dinner.  We unpacked some personal items and photos, etc., stayed a while, and then after she was settled in for the night I showed Steve around the rest of the facility.  It's really lovely; I'd live there in a heartbeat!  There are, of course, several gorgeous common rooms.  When I went earlier in the week there were ladies playing bridge, working jigsaw puzzles, taking walks, people listening to music...the dining room is gorgeous with table service, linen tablecloths and tasty looking food!  There is also a nice library with computers if you're so inclined.

There are four house cats that live in the assisted living section (not in mom's section where they could get underfoot and trip someone).  There are cute globular crystal bowls here and there filled with water for the cats.  The cats are very fat and friendly!  When Steve and I were walking around, we ran into Mom's friend again, walking down the hall with her drink still in hand; she invited us into her apartment to visit so we did that for a bit.

When we got ready to leave one of the house cats was sitting behind the receptionist window by the front entrance as if he was on duty.  Wish I'd taken a picture of that!

They'll be doing some fairly intense physical therapy and rehab over the next few weeks on my mom, and we'll see where we go from there.  I'm going to go check on her today, and probably tomorrow, but then back off to every few days for a visit because she really needs to focus on what she's really there for.  She needs to regain her independence and her strength.

Meanwhile, I have to go up to the school and move my classroom and Steve and I are planning on taking a quick overnight trip to Natchitoches before school starts.

So what's been happening in the world while I've been sitting at the hospital all week?

Doug Ross recaps the entire Dealergate controversy with a reminder that he's been covering that story for quite some time.

Reagainite Republican has a frightening preview of  upcoming tax increases.

Little Miss Attila is tired of all the talk about race and raises an interesting point.

Legal Insurrection reports on the Sharron Angle campaign which is coming together against Harry Reid.

The Other McCain notes that the Christine O'Donnell campaign is catching notice.

Bread Upon the Waters reports that four in ten voters would prefer to vote for ANY unnamed Republican in 2012 than vote for Obama.

Everybody knows I'm a beer lover but I'll NEVER drink one of these, via No Sheeples.

Ed Driscoll has the craziest Van Jones quote ever - and that's really saying something!

Bob Belvedere reports on an police chase involving an Amish youth, a buggy and a stop sign in New York.

Left Coast Rebel had a hit at The Daily Caller this week.

Mind Numbed Robot has another creative roundup!  Love it!

Over at Catalog Living, Elaine was horrified to find a tumbleweed in her house.

Okay, I'm calling a stop for now.  My house hasn't been cleaned in two weeks and I'm actually looking forward to doing some of that today.  Sick, I know.

Have a happy Saturday!
Posted by Pat Austin Becker at 10:03 AM

So glad to hear things are settling down a bit, Pat. Best of luck and well wishes for your mom.

Oh...and thanks for the linky love.

Glad to hear your mom is doing better. And thanks for the link!

Thanks a lot Pat, and best wishes for your Mom. That place does look very nice.

Beautiful place for you mom Pat... and since there's scotch involved, somehow I feel I should drop by!

God Bless you dear sweet mother... I share much in common with your family situation and challenges- and not for the first time

Oh bless your heart - thanks for the feature! The recipe is finally up. :-)

Sounds like your mom is in good hands - having a friend nearby is good medicine!

You know, that thing with Kerry and the taxes... Mr Obama pretty much did the same thing with the Nobel proceeds: he had the prize committee distribute directly to the charities he was giving it to so that he would not have to pay US income tax on the proceeds. And even conservatives shrugged it off. He's the President, Kerry wanted to be President - if anyone in the entire world has a moral obligation to pay every dime of tax they could possible owe, surely it is the President?

i love the porch and library. it's not home but hopefully your mom will be comfortable there during her rehab and will be able to go home soon. bet you will be browsing in the library and reading on the patio!