Obama Fires Another Shot at Louisiana 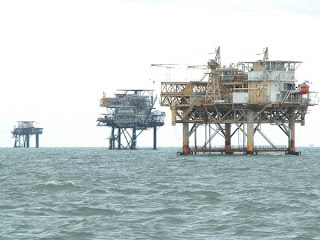 Even though the moratorium was overthrown in court drilling has not resumed pending appeals and that means lots of Louisianians are still out of work and suffering down on the coast.

The New York Times has the story:

In replying Tuesday to Judge Feldman’s order, the Interior Department, joined by the Justice Department, stated that the continued suspension of drilling was required because continued operations without new safety measures threatened irreparable harm to the marine and coastal environment across the gulf. The government also said that the BP oil spill had taxed the resources available to respond to and clean up the mess and that a second blowout would be impossible to address.

That's rich, isn't it?  Now they're worried about "the marine and coastal environment across the gulf"?  Seriously?  When did that happen?   Somewhere between the time they stopped the skimmers and refused permits for rock jetties to protect the islands?  I don't see the federal government all that worried about Louisiana's coastal environment.  Not at all.

And that whole "taxed the resources" thing doesn't fly either.  NOLA reports that there are more than 1,600 skimmers available in the United States, for example, but BP's latest information reports "more than 550" in operation.  How many more than 550?  551?  555?  800?  In addition, foreign assistance has been offered and often refused.  The chart from the State Department we referred to last week has been taken down so it's difficult to tell how many.

The whole strategy by Team Obama has been clearly to shut down deepwater drilling; the moratorium never made one bit of sense.  You don't punish everyone for the infraction of one operator; as I've said before - it's no different that accidents in coal mining (no coals mines were shut down) or the Toyota crisis (nobody shut down all auto manufacturing).  There's just no difference.  The moratorium is driven by a political agenda and for that, it's criminal.  The judge was correct in rejecting it.

Yet Team Obama soldiers on.  Forcing the issue and asking for reinstatement of of the moratorium just keeps everything on hold, keeps more people out of work, puts additional stress on families trying to make a living.  It's not just rig workers that are affected which is something Obama just doesn't get; or if he does, he just doesn't give a damn.

And so we're still idled.

When will it stop?  As I said yesterday, damn the feds and you coastal governors band together and do what needs to be done.  Protect the coast.  File your lawsuits.  Get people back to work.

Update:  Senator David Vitter has issued a statement regarding Obama's continued support of the moratorium:

“There’s no question that Louisiana’s economy would suffer under a moratorium, but the Obama administration keeps pushing it,” said Vitter.  “The decision to appeal really makes no sense, especially when I’ve proposed a reasonable alternative of tougher safety regulations and increased rig inspections.  The administration’s heavy-handed response is simply a slap in the face of every Louisianian.”

and much more
Posted by Pat Austin Becker at 12:18 PM

Likewise, we're one coal mine cave-in or explosion from a moratorium on that too.

Try heating your home in the winter without 85% of the capacity to do it (between oil and coal).

These commies do this because they are insulated from their consequences.

Tell Obama he can't fly to Chicago for date night in separate planes with his Bitter Half and ban private jets for his Hollyweird cult followers.

I heard that judge who blocked the first moratorium had at one time had $15,000 in shares of offshore drilling companies.

I guess I'm supposed to be more worked up over that then the $787 billion in thinly-disguised kickbacks given the sacchrine label of 'stimulus' last year.